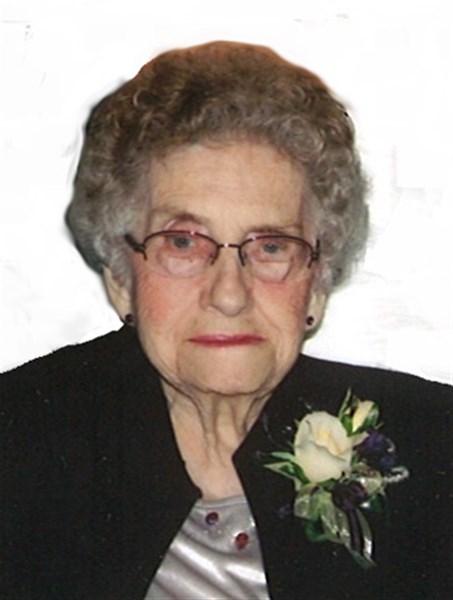 Eunice Irene Atherton was born October 12, 1923 in West Branch, Ogemaw County, Michigan. She was the daughter of John Eugene Atherton and Leora Eunice Twining Atherton and sister of Joseph and Dean Atherton. She lost her father at the age of five from an accident and her mother later married Henry Carl Gussman who was a wonderful stepfather. This union produced three more brothers, Robert, David and Leo Gussman.
Eunice completed the 11th grade before needing to leave school to care for her mother and baby brother, Leo, who were ill with measles. She was baptized a member of the Reorganized Church of Jesus Christ of Latter Day Saints at the age of eight and remained faithful the rest of her life. She and her family were very active members in their church and before a church was built in West  Branch, they held church twice a week in their home.
She met and two years later married George Joseph Myers of Rose City, Michigan on July 18, 1943 at that church in West Branch. To this union were born five children,  Garry Dean, John Joseph, Leora Sue, Robert Eugene and Kathleen Ann. They raised their family in Michigan until 1973 when they moved to Lamoni. In 1980 they moved to Mount Ayr where she resided until her death.
Eunice was a homemaker all her life except for a short time when she worked as a waitress and a department clerk. She was a devout wife and mother to the very end.
She was blessed with nine grandchildren and 10 great-grandchildren, with one more due in the summer. She was a grandmother to everyone. Her family was her life and she shared many good times with them, including teaching them to sing, knit, crochet and cook. Over the last year Eunice had two goals, to attend her grandson, Jared’s graduation from medical school and her daughter, Kathleen’s wedding, which she thoroughly enjoyed. She was able to celebrate her 90th birthday with all her family.
She was preceded in death by her husband, George, in 2011; their son, Garry Dean; her parents; stepfather; brothers, Robert, Joseph and Leo; sisters-in-law, Wanda Atherton, Roseanne Atherton and Alice VanSickle; brothers-in-law, Harry Rosenthal, Harry Briggs and Bill VanSickle; son-in-law, Daniel Beck, and grandson, Jonque Myers.
She is survived by her children, John (Veronica) Myers, Sue Beck, Robert Myers and Kathleen (Larry) White; brothers, Dean Atherton and David (Martha) Gussman; sisters-in-law, Linda Gussman, Margi Kraft, Carolyne Farrand and Leona Briggs; grandchildren, Benjamin (Rachael) Myers, Steven (Sarah) Myers, Joel (Kristy Lowery) Beck, Karen (David) Tow, Jared (Holly) Beck, Bradley Myers, Kelly (John) Walker and Matthew Crawford; great-grandchildren, Noel Myers, Christian and Paige Bogner, Elizabeth and Christopher Myers, Micah Lowery-Beck, Daniel Tow and Justin, Christopher and Michael Walker; two special family members, Victoria Myers and Mary Ann Carmean, and a host of other family and friends.
A memorial fund has been established in her name to be decided later. Watson-Armstrong Funeral Home in Mount Ayr was in charge of the arrangements.
A memorial service was held at the Church of Jesus Christ, Restoration Branch in Mount Ayr on Saturday, January 11, 2014, with High Priest Alan Smith and High Priest Sherman Phipps officiating. Pianist was Pat Bolingbroke.
Private interment was at the Rose Hill Cemetery in Mount Ayr.