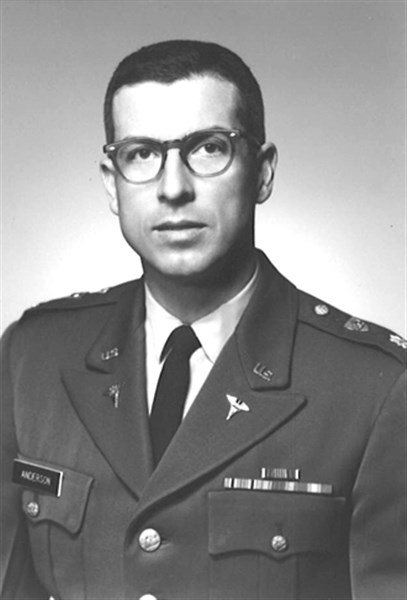 Bill was born to Wilma Ina Mosley and Kenneth West Anderson in Clarinda, Iowa on September 25 1927. His parents were divorced when Bill was an infant, and after the divorce, he and his mother lived mostly with his grandparents. He remembered fondly Saturday evenings walking around the town square with his grandfather.
When he was 13, his mother married Doctor C.F. Richey of Clarinda.
He graduated from Clarinda High School in 1945, and immediately joined the Navy. WWII ended that same year so he was released early from the Navy which allowed him to return to Iowa and begin studies for his DVM. He graduated from ISU in 1951 and began his private practice in Blockton, Iowa.
He married Marcene Hamilton on April 11 1952. Bill joined the Army Veterinary Core in 1957 and traveled with his family throughout the United States, Europe and Asia. He served as a veterinarian, food inspector, as well as an instructor for 21 years. He retired from the Army as a Colonel in 1978 and returned to Iowa to enjoy 35 years of raising cattle in Ringgold County.
He passed away April 11, 2015, his 63rd wedding anniversary, at Clearview Nursing Home with his family by his side.
He is survived by his wife Marcene, two children Kevin and Kristen, and two grandsons Jared and Jacob White.
Visitation will be from 12-8 p.m. Thursday with the family present from 6-8 p.m. Thursday at the Watson-Armstrong Funeral Home in Mount Ayr.
Services were held at 10:30 a.m. Friday, April 17, 2015 at First Christian Church in Mount Ayr. Officiating was Rev. Chris Conklin.
Music was provided by Ginny Eighmy. Music included “How Great Thou Art” and “Eternal Father.”
Pallbearers were Jared White, Loren Winemiller, Ron Hamilton, Jacob White, Jim Winemiller and Landon White.
Honorary pallbearers were Ron Willey, Keith Miller, Bill French, Neil Hartman, Dan Weddle, Hugh Terwilliger, Don Solliday and Kevin Dessinger.
Burial  was in Clarinda Cemetery at 2 p.m. Friday, April 17, 2015.
The Iowa Honor Guard provided military rites.
Memorials have been set up for First Christian Church in Mount Ayr, HCI Care Services and Clearview Home.