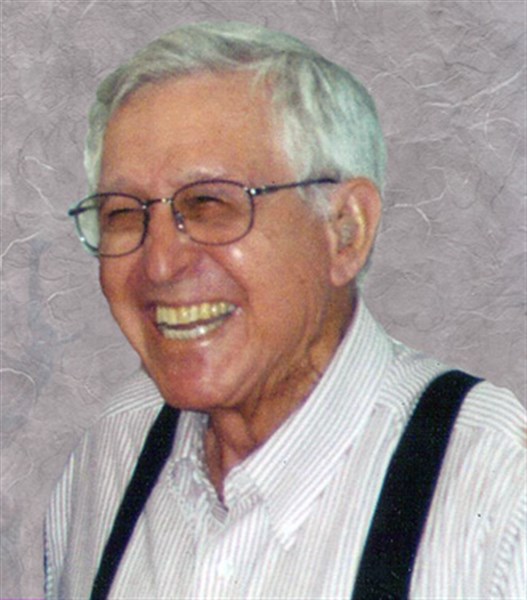 Keith E. Fetters, 96, of Chariton passed away on April 7, 2015.  Visitation was at Fielding Funeral Home, Chariton, Iowa on April 9, 2015. Funeral services were held on April 10, 2015 at Fielding Funeral Home. Burial followed at the Chariton Cemetery.
Keith was born at home on a farm near Lemons, Missouri on January 1, 1919 to David and Lula (Chappell) Fetters.  Keith grew up on the farm where he loved working with horses.  He attended school at a one-room rural schoolhouse through 8th grade, and then later obtained his GED.  He worked in a coal mine and did farm work for a short time, then was drafted into the U.S. Army and served in World War II.  While in the military, he married Esther Boswell on June 13, 1942 in Portland, Oregon.  After his discharge from the military, he attended college for a few years at Northeast Missouri State University, Kirksville, MO.  He and Esther then moved to the rural Blockton, Iowa area where he rented a farm.  He then moved to a farm he rented near Lamoni, Iowa, later purchasing a nearby farm and farmed there for several years.  After many years of farming, Keith pursued a career as an insurance salesman.  He first began selling insurance for the Decatur County Farm Bureau Office, and then he was promoted to be manager of the Lucas and Clarke County Farm Bureau Insurance Offices, which required him and his family to move to Chariton, Iowa.  After working for Farm Bureau for several years, Keith became interested in purchasing his own insurance agency.  So, Keith and Wayne Fletcher bought and managed K. Threlkeld Insurance Agency, which Keith worked at until his retirement in December 1983.
When Keith retired, he and his wife, Esther, enjoyed traveling in their motor home to many parts of the U.S.  They spent several winters in southern Texas. They also enjoyed camping with the Red Haw Campers in Chariton and also enjoyed camping with other couples associated with the Church of Christ.  After Esther’s death in October 1994, Keith met and married Ercell Duncan of Mt. Pleasant, Texas in August 1995.  Keith and Ercell also spent a lot of time traveling in their motor home and spending winters in southern Texas prior to Ercell’s death in November 2013.
Keith was an elder at the Bethlehem Church of Christ for many years.  At the time of his death, Keith was a member of the Knoxville, Iowa Church of Christ.  Church and family were both very important to Keith.  Keith loved life and loved people, which is why he was so successful as an insurance salesman.
Preceding Keith in death were his wives, Esther and Ercell and all 8 of his siblings: Vera, Velma, Josephine, Ernest, Eldon, Carol, Everett, and Dwight.  He was also preceded in death by his parents, David and Lula; a step-son, James Duncan; step daughter-in-law, Barbara Duncan; a great-grandson, Blaine Fetters; a step-grandson, Jeff Duncan; and a step-granddaughter, Denise Dering.
Survivors include his daughter, Phyllis (Philip) Liggett and sons, Phillip (Ruth) Fetters, Leroy Fetters, and David (Marla) Fetters.  Also surviving are his step-sons, Joe (Joan) Duncan and Ronald (Pat) Duncan; 13 grandchildren, 12 great-grandchildren, one great-great grandchild; and many nieces and nephews.  Brothers-in-law and sisters-in-law, Barbara Fetters, Roscoe Imhoff, Hugh (Iris) Boswell, and Billie (Max) John also survive.
Interment was held in the Chariton Cemetery following services.  Pallbearers were his grandsons and nephews:  Terry Fetters, Ian Garbi, Dan Saville, Brett Grimm, Jim Fivecoat, and Sheldon Stocker.  The Honorary Pallbearers were his granddaughters and included:   Tammy Fivecoat, Courtney Fetters, Andrea Lang, Alissa Garbi, Sheri Saville, Kara Fetters and Karen Fetters.  Memorial contributions may be made to the Care Initiatives Hospice, Greenfield, IA and/or Alzheimer’s Association. On-line condolences may be sent to FieldingFuneralHomes.com.