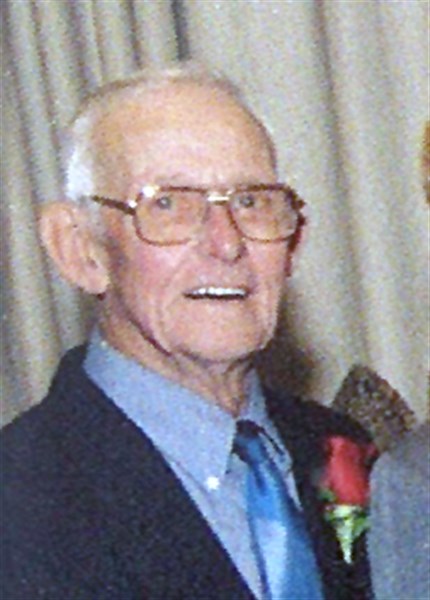 Billie Gene Goodale, the only son of Earl L. and Retha (Johnson) Goodale, was born on June 22, 1929 in Creston, Iowa. Bill entered into eternal rest on April 23, 2015 at his home on the family farm east of Diagonal, Iowa, at the age of 85.
Bill lived his entire life in Diagonal. Due to his mother’s arthritic health issues, his “Granny” Emma Johnson lived in their home and took on much of the responsibility of caring for Bill. He graduated from Diagonal High School in 1947. During his high school years, he was an all-state basketball player (1947) and played in the state tournament in 1946 and 1947. He was recruited to play basketball for Drake University where he attended for one year. He then returned to Diagonal, and married Joan Woosley on June 22, 1948. He worked in his father’s produce business until March, 1949, when they moved to the country, where he farmed and had a dairy operation and lived the rest of his life.
Bill served as a respected member of the Diagonal Community school board for many years. He was also Sunday School superintendent and a lay speaker for the United Methodist Church in Diagonal. He was a Jefferson Township trustee and served on the ASCS County Committee.
Bill was renowned in the area for his knowledge of Indian history and collected Indian artifacts. He spent a lot of time hunting for them with Joan and the four boys. He also loved to cut and polish rocks. Bill loved to fish and always looked forward to the annual fishing trip with family in Minnesota. Bill was a frequent Dairy Queen customer, as a chocolate malt with double malt was one of his favorite foods. He was also an avid Iowa Hawkeye fan. Most of all, Bill enjoyed being with family, the many holidays spent together, and the annual 4th of July fireworks celebration held at the farm. The importance he put on being a family is a gift left for all of his family.
Left to cherish his memory is his wife Joan of Diagonal, sons Steve from Martensdale, Jon (Kathy) from Diagonal, Dan (Kristy) from Diagonal, and Cris (Gale) from Adel. Grandchildren Eric (Brenda) Goodale, Angie (Jerry) Bedwell, Cindy (Darin) Goins, Billi (Drew) Larsen, Mike (Sarah) Goodale, Kelli Goodale, Greg (Katie) Goodale, Niki Goodale, Brandi Goodale, Ryan Goodale, and Staci Goodale. He is also survived by 13 great grandchildren.
Bill will be remembered for his quiet sense of humor and love for his family and community.
Services will be held at the United Church of Diagonal at 10:30 a.m. on Thursday, April 30, 2015. Casket bearers will be Eric Goodale, Mike Goodale, Greg Goodale, Ryan Goodale, Jerry Bedwell, Darin Goins and Drew Larsen with honorary pallbearers being Bryan Cook, Claire Newton, Dick Ide and Kenny Scherer. Officiating the service will be Rev. Ed Shields. Burial is in the Knowlton Cemetery. Memorial funds have been made to Diagonal Community School, United Church of Diagonal and the Knowlton Cemetery.