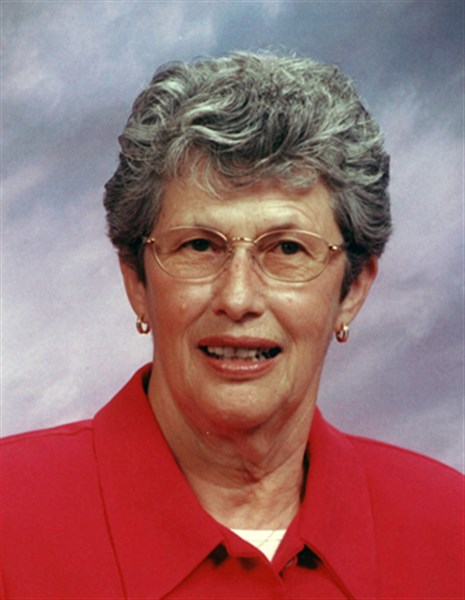 Eileen Mason, daughter of Ralph F. & Helen Lucille (Clouse) Pritchett, was born July 17, 1934 at home in rural Diagonal, Iowa.
The family moved to the Delphos area and Eileen graduated from Delphos High School.
Eileen moved to Longmont, Colorado in 1954 where she lived until 1990. She was a bookeeper and and worked at Sullivan Drug Company, JC Penney Company, and Slack-Horner Foundry company. Eileen was very detailed and organized in her work and it spilled over into the way she lived.
On April 11, 1969, Eileen married Frank R. Mason and together they raised her two children, Kenneth Eugene and Kathryn Eileen.
In 1990, Eileen and Frank moved to Mount Ayr where she lived the remainder of her life. Frank passed away on April 11, 2000. Eileen will be remembered for being generous and loving. She will be dearly missed by her family and many friends.
Eileen passed away suddenly, with her family by her side, as the result of a heart attack on April 24, 2015. She was preceded in death by her parents; husband Frank; brother Ralph Pritchett, Jr.; and sister Lois Mackey.
Those left to cherish her memory include her children Kenneth (Cindy) Stephens and Kathy Poore, all of Mount Ayr; grandchildren Josie (Wyatt) Mobley, Aimie (Robby) Larson, Scott (Chandra) Poore, and Kristen (Kenneth Robertson) Poore; great grandchildren Cole & Kerrigan Mobley and Cody, Tucker, Tate Larson; sister Marilyn (Theron) Johnson of Delphos, IA; brother Jerry Pritchett of Clarinda, IA; nieces, nephews, other relatives and friends.
Services will be held at the Watson-Armstrong Funeral Home in Mount Ayr, Iowa at 11 a.m. on Friday, May 1, 2015. Pastor Bill Armstrong will officiate the service with Nancy Sackett, Mary Davenport and Margaret Bickers providing the music. Honorary pallbearers will be Josie Mobley, Aimie Larson, Scott Poore and Kristen Poore. There will be a private burial at a later day at the Rose Hill Cemetery in Mount Ayr, Iowa. A memorial fund to the Rose Hill Cemetery has been established.