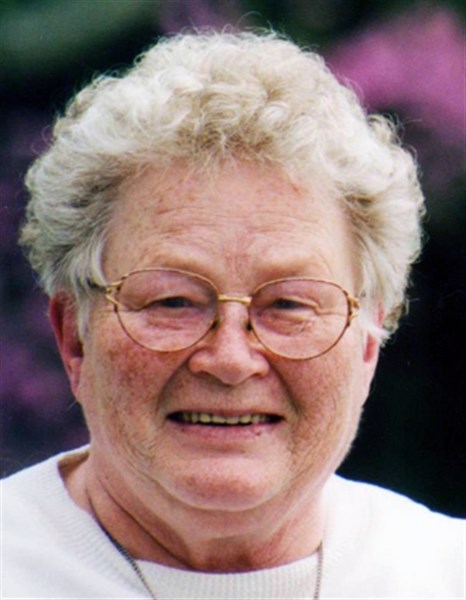 Alice May Arnold, age 84, of Grand River, Iowa, was born to Orel and Beryl Boles on March
13, 1931. She died at the Ringgold County Hospital in Mount Ayr, Iowa on Sunday, April 26, 2015.
Alice was the oldest of six siblings. She attended Brisk School for elementary, Leon High School for three years, and Van Wert High School for her senior year, graduating in 1950. On April 30, 1951, she married Dale Edward Arnold at Sheppard Air Force Base in Wichita Falls, Texas. To this union two sons were born, Gary Lee and Randall Dale.
Over the years, Alice worked at several places including Decatur County Hospital as a medical librarian, Whitfield Feed and Hatchery as a bookkeeper, Metcalf Drug all before attending Southwestern Community College. In 1975, she graduated with an LPN degree in nursing. She worked at the Ringgold County Hospital in Mount Ayr for over 20 years. In her free time, Alice enjoyed knitting and crocheting. She was an avid reader and enjoyed attending and dancing at the jam sessions with Dale. She liked country music.
Preceding her in death were her parents and great granddaughter, Lexy. Survivors include her husband, Dale Arnold, of Grand River; sons, Gary Arnold and Randy Arnold, both of Grand River; three grandchildren, Dale Randall Arnold, Kara Arnold and Curtis, and Meghin and David Blythe; great grandchildren, Gavin and Jayce; siblings, David and Mardell Boles and Susie and Keith Wood, all of Iowa, Anne and Richard Rieb of Colorado, Mary Boles and Lorraine Johnson, both of Washington; and other relatives and friends.
Funeral services were held at the Slade – O’Donnell Funeral Home in Leon, Iowa at 10:30 a.m. Friday, May 1, 2015, with Pastor Rick Hawkins officiating. Burial was in the Grand River Cemetery, Grand River, Iowa.