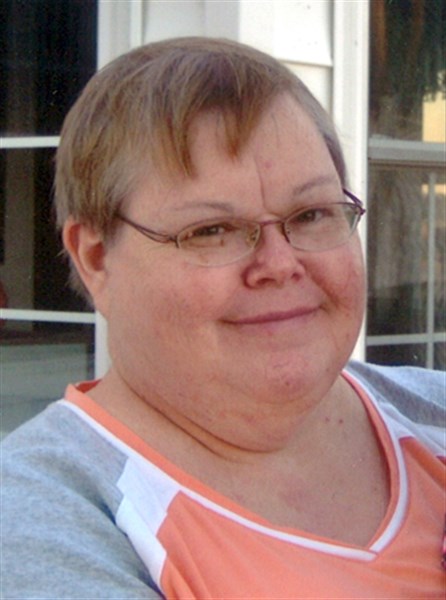 Helen Jenine Vice was born on September 19, 1959, in Burlington, Iowa, to George and Shirley (Scott) Vice. She was welcomed by older sister, Peggy. Jenine passed away on April 27, 2015 at Mercy Medical Center in Des Moines, after a sudden illness took her life.
Jenine started elementary school in the Blakesburg, Iowa schools. In 1970, the family moved to Mount Ayr and Jenine graduated with the Mount Ayr Class of 1981.
Jenine loved her family and friends. She never knew a stranger and could talk to anyone. She enjoyed her work at Mount Ayr Health Care and Dollar General, which was proven by her dedication, very seldom missing a day and always willing to help out when others could not work.
Bowling, crocheting, playing Bingo and going to the casino were things she enjoyed very much, but her favorite pastime was attending sporting events, music concerts or anything else that her great-nieces and nephews were involved in. Jenine loved family get togethers, and when the kids started arriving, she was always excited to see them. Each niece, nephew, great niece and great nephew has a unique blanket crocheted by Aunt Jenine, with no one blanket like the other.
Jenine was preceded in death by her father, George, grandparents, Sam and Verdie Vice and Alton and Helen Scott.
Left to cherish her memory are her mother, Shirley and sister, Peggy (Larry) Drake all of Mount Ayr. Nieces and nephews Tracy (Shannon) Barnes of Tingley, Terry (Michelle) Henry of Creston and Troy(Jennifer) Henry of Davis City, and Trisha (Aaron) Stevens of Salisbury, Mo. Great nieces and nephews Halsie, Linsie and Kensie Barnes, Trevor, Johnathon, Shayla, and Andrew Henry, Addy, Maggie and Jessalyn Frank and Myrie and Kathan Henry and Riley and Savannah Stevens. As well as extended family and many friends.
Service for Jenine were held at the Watson-Armstrong Funeral Home on Saturday, May 2, 2015 at 2 p.m. Rev. Al Rusk officiated the service with Deb Cannon and Deb Larson providing the music.
Pallbearers were Troy Henry, Terry Henry, Shannon Barnes, Aaron Stevens, Trevor Henry and Sam Vice. Burial is in Rose Hill Cemetery in Mount Ayr, Iowa.  A memorial fund has been established in her name to be decided later.