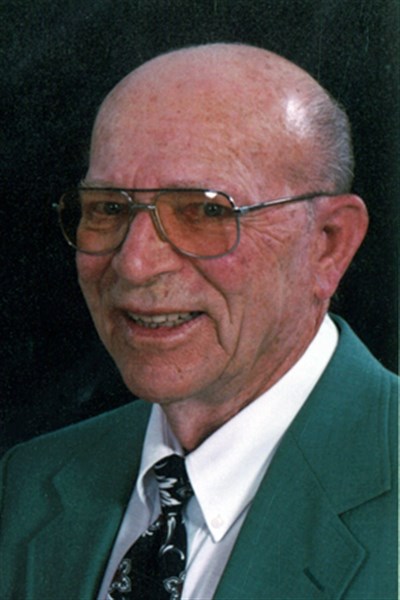 Charles Wayne McGehee, 94, of Mount Ayr, passed away on May 28, 2015 at Clearview Home in Mount Ayr, Iowa.
Wayne was born June 9, 1920 in Ringgold County, Iowa, the son of Ward and Lotte (Dugan) McGehee. He graduated from Tingley High school in 1939. He enlisted in the Army in 1941, stationed in Panama as a surgical technician and working with the Peacekeeping unit. He was discharged in 1945.
Wayne married Rosetta Mae (Rush) McGehee on January 25, 1944. They were blessed with a son and daughter; Charles “Chuck” Wayne McGehee, Jr. and Mary Anne McGehee Lane. He was a devoted husband and father and cherished his family more than anything.
He worked for Prentice Hatchery from the late 40s into the early 50s. Wayne spent most of his career at the United States Post office as a mail carrier, and was only nipped by a dog once! He retired from the post office in 1982. He was a member of the First Christian Church and served as the church treasurer for 40 years.
Wayne was a quiet and reserved man, and his favorite thing to do during retirement was “nothing”; although, Rosetta rarely let him sit still. As much as he loved to do nothing, Rosetta loved to always be on the go, and he could never tell her no. He loved to be at home mowing, woodworking in his garage, helping Rosetta with crafts, and most of all watching his beloved Hawkeyes play. Watching sports was one of his favorite things to do. When his grandchildren were in school, he never missed their sporting events or activities. He also enjoyed trips to California and Texas with Rosetta in his retirement.
Wayne was preceded in death by his parents; wife Rosetta McGehee; son Chuck McGehee; daughter Mary Anne Lane; son-in-law Roger Lane; and brothers Bob, Marion, John and Harold.
Those left to cherish the memories they shared with Wayne include his sister, Ellen Paxon of Marshalltown, IA; Grandchildren Lance (Christina) Lane of Emporia, KS, Christy (Todd) Hofsaess of Winterset, IA, and Lisa (Todd) Carlson of New Virginia, IA; Great Grandchildren Brandon & Miranda Lane, Olivia and Cadi Carlson, and Colton and Carly Hofsaess.
Services were held at Rose Hill Cemetery in Mount Ayr, IA on Saturday, May 30, 2015 at 11 a.m. with Pastor Chris Conklin officiating. Casketbearers were Roger Byer, Darrell Dodge, Daniel Graham, Rick Schweitzberger, Todd Hofsaess and Todd Carlson. Military rites were performed by Ringgold Post #172 American Legion and U.S. Army Honor Guard Unit. A memorial fund has been established to the First Christian Church in Mount Ayr, Iowa.