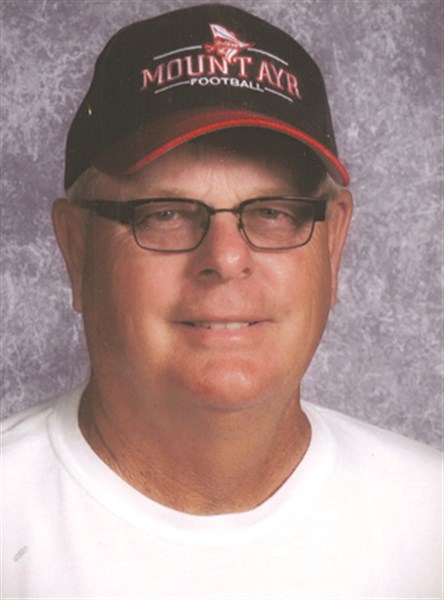 Kenny Michael Markley, son of Kenneth Kyle and Lillian Catherine (Novak) Markley, was born January 31, 1948 at Greater Community Hospital in Creston, Iowa.
Ken grew up in Mount Ayr and graduated from Mount Ayr High School in 1966. He furthered his education at Creston Community College and transferred to Graceland University where he graduated with a Bachelors in Physical Education.
Ken was a Phys-Ed teacher at Lamoni Community School for 32 years. He also coached a number of sports, including but not limited to, wrestling, girls basketball, track, and softball. He would also be an assistant coach in Mount Ayr for the girls basketball and middle school softball teams. To say Kenny was passionate about sports would be an understatement. He loved the youth and he coached and encouraged many players and teams. Ken’s zeal for the game might bring the attention of the refs but he always taught sportsmanship to the players. Kenny was also a school bus driver and drove not only for the teams but also a school bus driver to many rural kids every day.
Kenny’s favorite sport and probably the first love of his life was the game of golf. He played with passion and was very good at the game. He taught many people how to play better at golf and won a multitude of tournaments.
After retiring from teaching, Kenny started a lawn mowing business with seven yards that grew to over 60 yards and seven rural cemeteries. He was a perfectionist and cared how the work was done.
Kenny will be remembered for his sense of humor and how he made everybody feel special. He loved to spend time with his friends at the dead-beat club and relationships were very important to him. His long time companion, Donna Lysinger, shared her life with Kenny and in return, he was like a dad to Donna’s daughter Eve and grandpa to Eve and Daron’s daughter Taylor.
Ken died on July 3, 2015 doing what he loved; mowing a yard and leaving the world a better place than he found it. He was preceded in death by his parents; sister Arlene Hutchinson and her husband Jack; and his big brother James Markley.
Those left to cherish his memory include his sister Kaye Powell of Mount Ayr; nephew Jeff (Cheryl) Powell of Kellerton, IA; niece Katreena (Glen) Foster of Colfax, IA; companion Donna Lysinger of Lamoni, IA and her daughter Eve (Daron) Henson and granddaughter Taylor Henson; great nieces and great nephews; other relatives and many, many good and close friends.
Services will be held Thursday, July 9, 2015 at 10:30 a.m. at the Mount Ayr high school gymnasium with Rev. Jodi Rushing and Rev. Edward Shields officiating. Music will be provided by Deb Cannon and Simply Voices. Casketbearers will be Doug McKern, Jeff Chromy, Todd Sturgis, Ted Smith, Ronche Still, Jesse Still, Jim Brand and T.J. Redding. Honorary pallbearers will be Steve Peck, William Rex, Mark Stafford, Howard Johnson, Jeff Collier and Justin Redding. Burial will be in the Rose Hill Cemetery at Mount Ayr, IA. A memorial fund has been established for a scholarship at Mount Ayr High School, Lamoni Ken Markley Memorial Fund c/o Lamoni Alumni Association.