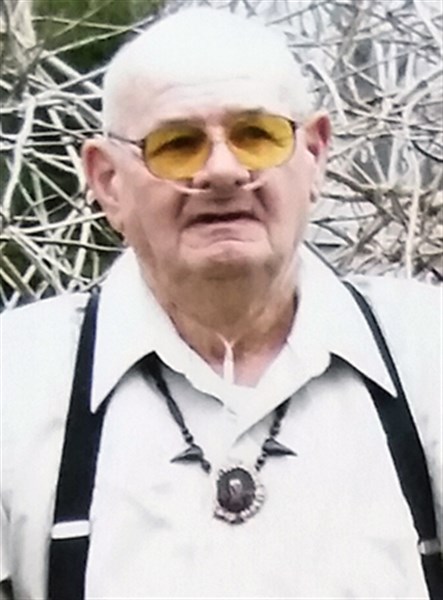 Robert Wayne George left this world on August 2, 2015, with his loving wife of 64 years at his side and surrounded by his family.
Wayne, as he was called, was born December 22, 1930 at his family home north of Kellerton, IA. He was later joined by a little sister, Bonnie Marie.
Wayne met the love of his life, Theda JoAnn Hanks, when she was just five years old. They later married on April 22, 1951. They had two sons, Michael Wayne and Ronald Lee “Tuffy” and a daughter, Patricia Ann.
Wayne lived his life on his terms. He worked road construction when he was younger always finding time to hunt, trap and fish. He and JoAnn later bought the Kellerton Tavern, “Wayne & Jody’s Tap,” and ran it for several years. He always had a dog to sell or a gun to trade. He started a dog supply business, where he sold the lights needed to hunt at night and the dog collars for the hunting dogs, with name tags to make sure your dog got home. He and JoAnn, after she retired, traveled to Rutlege monthly where they worked together making dog tags for the collars, trading traps, and other hunting supplies. Wayne loved the outdoors; he loved to trap and hunt. He belonged to the “Weezing Gang” for many years, a group of older gentlemen who would spend their winter days coyote hunting. He taught his boys the love for the outdoors and to hunt and trap and shoot a gun. He started collecting antique traps and owned over 600 antique traps with no two alike when he sold the home place and moved to Wyoming in 2011.
Wayne was preceded in death by his parents and his two sons Michael Wayne and Ronald Lee “Tuffy”; his in-laws, Floyd Hanks and Bertha Lorraine Jarrad; sister-in-law Marsh; and brothers-in-law Roger Greenman and Howard Brown.
He is survived by his wife JoAnn of 64 years; his daughter Patricia (Mike) Grose; daughter-in-law JoAnn (Tuffy); and his sister Bonnie Brown; 8 grand children, 15 great grandchildren; many nieces and nephews; and a few good friends.
A memorial service will be held at 1 p.m. Friday, August 14 at Watson-Armstrong Funeral Home in Mount Ayr with Pastor Bill Armstrong officiating.
A memorial fund has been established for Central Wyoming Hospice, 319 South Wilson Street, Casper, Wyoming, 82601.