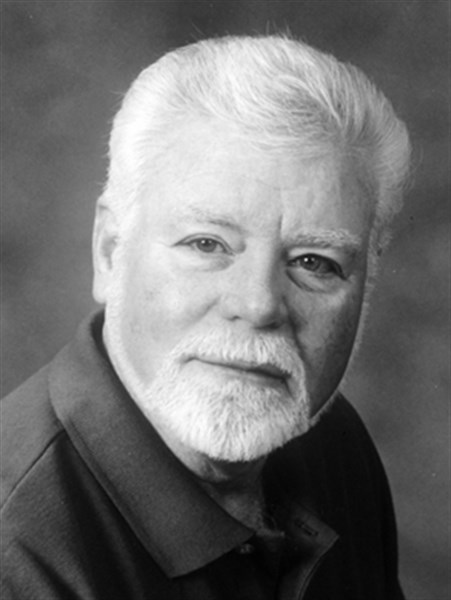 Stephen Alan Merritt passed away on August 8 at his home in Franklin, North Carolina after an extended illness. A graveside service with family and friends will be held Saturday, September 19 at 12 noon at the Maple Row Cemetery in Kellerton, Iowa with the Reverend Phil Coe officiating.
Stephen was born April 17, 1940 in Kellerton Iowa to Jennie Mae (Foltz) Merritt and Everett Hugh Merritt. He graduated from high school in Bondurant, Iowa and attended the University of Iowa. He met his future wife when he was the Kodak retail manager in the downtown Des Moines location. Stephen and Neva Brown were married Oct 1, 1961. To this union were born twin sons, Matt and Mark. In 1968 the family moved to Gatlinburg, Tennessee where they purchased a building and started an arts and crafts business called The Red Shed. Steve was a talented and well respected artist and craftsman and filled his shop with beautiful items. Many consignors also sold their one of a kind pieces in his shop.
He relocated to Franklin, North Carolina in 1995 where he continued with his art business and owner of the Dogwood Hills Dog Kennel as well as providing interior design services to many upscale homes in the area. Stephen will be remembered for the sharing of his artistic talent throughout his life with others through creative instruction and encouragement.
Even though Stephen had been gone from Iowa for many years, he still had fond memories of what he referred to as the “Heartland of America” which was never out of his mind. He looked forward to receiving the Mount Ayr Record-News each week to keep in touch with the shared stories of the folks in the Heartland.
Stephen was predeceased by his mother, Jennie Merritt in 1943; father, Everett Merritt and step-mother, Elizabeth (Foxwell) Merritt; his brother, Charles killed in Vietnam; his grandparents, Jesse and Cora (Campbell) Foltz and Charlie and Rose (Salzman) Merritt and his brother-in-law, Larry Schultz.
He is survived by his sons, Mark (Teresa) of Argyle, Texas and Matt (Melinda) of Gatlinburg, Tennessee; three grandsons, Adam, Christopher and Kody Merritt: two great-grandsons, Nathan and Jace Merritt; sisters, Marlene Schultz and Rosie Foxwell of Des Moines and numerous nieces, nephews and cousins.
A memorial fund is being established in his name to be decided later. Memorials may be sent to Marlene “Francie” Schultz, PO 57677, Des Moines, IA 50317.