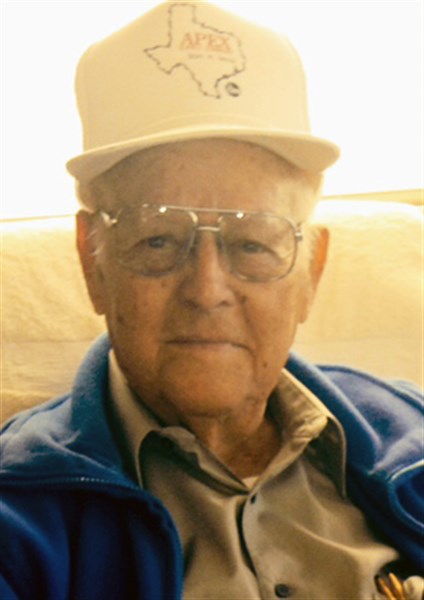 Lloyd was born November 26, 1923 in Mount Ayr, IA to Mace and Doris (Jennings) German. He grew up and attended school in Mount Ayr, graduating from high school in 1941. Lloyd enlisted in the army on September 20, 1943, and became a staff sergeant in the 40th Tank Battalion, 7th Armored Division. He landed on Utah Beach on Oct. 6, 1944, and fought campaigns in Northern France, Ardennes (Battle of the Bulge), Rhineland and Central Europe.

After the war, Lloyd wed Nina J. Sweeney on Jan. 15, 1947. They were married for 51 years until Nina’s death in May of 1998. They moved to Des Moines in 1953 and Lloyd took a job at Western Tool and Stamping Co., working his way up from the assembly line to Parts Buyer. He went on to be Senior Steel Buyer for Massey-Ferguson and relocated with the company to Racine, WI in 1981.

When Lloyd retired in 1989, he and Nina sold their home and traveled the country in their 5th wheel camper. Eventually, they settled in Golden Grove RV Park in Mission, TX, where they made many lifelong friends. They wintered there and returned to Iowa every summer to spend time with family. Lloyd enjoyed camping, carpentry, fixing just about anything, country music, the Lonesome Dove series and sitting outside in the sun watching the birds.

He was preceded in death by his parents, his wife, and his six siblings: brothers John, Harold, Warren, Robert and James German, and his sister Mary Catherine Bagley. Surviving him are four children: Linda (Nick) Lucy of Dubuque, Barb (Dale) Grunewald of Clive, Bruce German of Cedar Rapids, and Denise German, of Stilwell, KS; 11 grandchildren, 12 great-grandchildren, many nieces and nephews, and a special friend, Linda Rivera. Lloyd will be interred at Chapel Hill Gardens in Des Moines with a memorial service to follow at a later date.