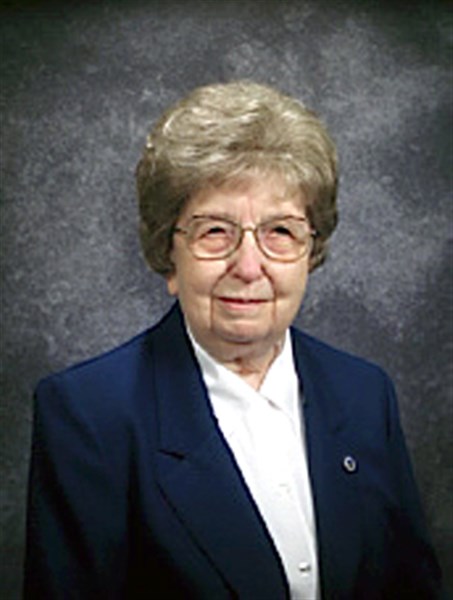 Carolyn Mildred Walters was born to Bert and Margaret O’Grady Walters on June 21, 1919 in Beaconsfield, IA.  She entered the Congregation of the Humility of Mary in 1937, professing vows in 1939.

Sister graduated from Marycrest College in Davenport; she taught at St. Mary, Ottumwa, Cosgrove Consolidated, St. Anthony, Des Moines and Georgetown Public School.  In 1943 she became Assistant to the Dean of Marycrest College and Registrar in 1954, a position she held until 1970.  After completing an MA in Gerontology at the University of Southern Florida and certification in Clinical Pastoral Education from the University of Chicago, she served as Co-Director of Social Concerns for the Diocese of Jefferson City, MO. Her background was ideal for work with the ageing; she connected seniors with appropriate services.  Workshops and study of death and dying added to Sister’s ministry with others.  With her CNA certificate, she served as nurse aide in the Ottumwa Heights Infirmary.

In 1983 she became Coordinator of Alumni Records for Marycrest/Teikyo-Marycrest College in Davenport. She was co-founder of the Quad Cities Chapter of Alzheimer’s Association.  In 2000 she retired to the Humility of Mary Center and in 2012 to Bishop Drumm Retirement Center.

Sister is survived by nieces, cousins, numerous friends and the Sisters and Associates of her religious community.  She was preceded in death by her parents and brother, Francis.

Memorials may be made to the Congregation of the Humility of Mary.

Online remembrances and condolences may be expressed to the family by visiting Sr. Carolyn’s obituary at www.hmdfuneralhome.com.