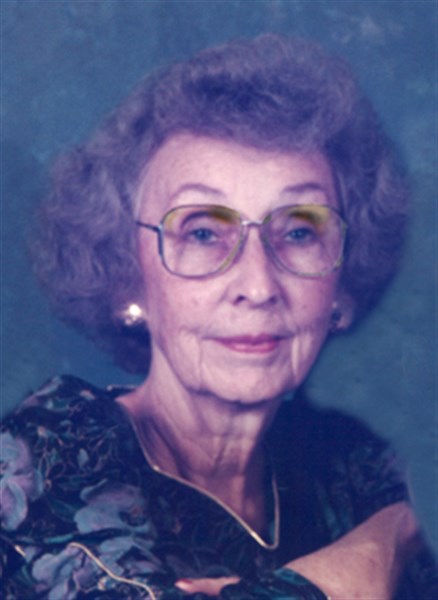 Marjorie Pauline Fisher McFarland, daughter of Keith and Inez Fisher, was born June 23, 1922 near Redding, Iowa and departed this life November 20, 2015 at the age of 93.

On August 16, 1941 she was united in marriage with John H. McFarland in St. Joseph, Missouri.  To this union were born two children, a daughter, Melanie Lane (Marvin) of Overland Park, Kansas and a son, John Keith (Katherine) of Warrensburg, Missouri.  Marge and John were privileged to have enjoyed 67 years together.

At an early age Marjorie was baptized and at her death she had been a long time member of the First Christian Church of Mount Ayr.  She enjoyed being a Sunday school teacher for many years when her children were young.

After graduation from Benton High School in 1939 securing her degree was a dream that led her to take classes from Drake University, Graceland University, Area Community Colleges, and the University of Iowa which culminated with graduation from Northwest Missouri State University in 1963.  Education was an extensive part of Marge’s life from age 5 to 83 she was involved in education in some way.  It included attending school, tutoring while John was in the Navy in North Carolina, playing the piano for the music teacher while he was stationed in Ottumwa.  Marge taught school in Benton, Tingley, and Mount Ayr.  After she retired she substituted for many years and was always available when needed.  Consequently she has touched many lives in her journey as a student and teacher.

Marge was honored by being recognized in Who’s Who Among America’s Teachers.  Inclusion in Who’s Who ranks among the most prestigious of professional honors because you are singled out by students as one who has strongly influenced their life and contributed to their success.  Good teachers enjoy a unique kind of immortality as their influence never stops radiating.

Marge was preceded in death by her husband, John, her parents, Keith and Inez and a brother, Bob Fisher and wife Neva.

Mourning her passing are her daughter Melanie and husband Dr. Marvin Lane of Overland Park, Kansas and son John K. and wife Kathy of Warrensburg, Missouri.  Marge is survived by three grandchildren, Shayne and wife, Marilyn Lane of Lafayette, Colorado, Scott and wife, Kim Lane of Leawood, Kansas and Megan and husband, Jim Stuck of Warrensburg, Missouri.  She is also remembered with great love by her six great-grandchildren, Nathan and wife, Lauren, Matthew, Ashton, and Michael John Lane and Maggie and Evan Stuck, plus a host of friends including her special childhood friend of 90 years, Esther Jackson.  Also mourning her death are numerous extended family members.

Services were held at the Watson-Armstrong Funeral Home in Mount Ayr at 11 a.m. on November 24 with Pastor Ed Shields officiating. Casketbearers were Dr. Marvin Lane, M. Scott Lane, Nathan Lane, Mathew Lane, Michael John Lane and James Stuck. Honorary Casketbearers “All my friends” a quote from mom. Marge was laid to rest at the Rose Hill Cemetery in Mount Ayr.