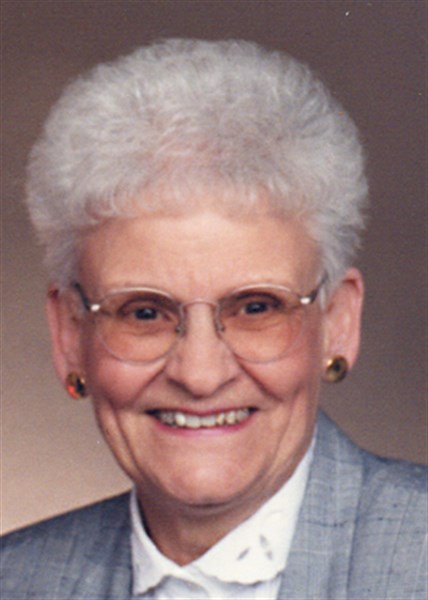 Naomi Leontine (Minnick) Been, 88, passed away January 2, 2016 surrounded by loved ones at the Des Moines Mercy West Lakes Hospital. Services were held at Hamilton’s on Westown Parkway, 3601 Westown Parkway in West Des Moines, Iowa with visitation Tuesday, January 5 from 5 to 7 p.m. and the funeral service on Wednesday, January 6 at 10:00 a.m. Visitation resumed at Watson-Armstrong Funeral Home in Mount Ayr on Wednesday, January 6 from 2:00 p.m. to 2:30 p.m. with a short service beginning at 2:30 p.m. Burial followed in Rose Hill Cemetery in Mount Ayr.

Naomi was born July 23, 1927 in Ringgold County, Iowa to Emmel and Faresta (Hanks) Minnick. She graduated from Kellerton High School in 1946 and then received a Limited Teaching Certificate from Creston Junior College. Naomi was a teacher for two years in Rural Schools in Ringgold and Decatur Counties. On July 5, 1947 she married Milo H. Been and they had 68 wonderful years together. This marriage was blessed with the birth of their daughter, Melody Kay in 1948. The family moved to Des Moines in 1954. Naomi was employed at Katz Drug, Addressograph – Multigraph and National Travelers Life Insurance until her retirement in October of 1997.

She is survived by her husband, Milo “Mike”; daughter, Melody; sisters-in-law, Darlene Minnick, Lillian Been, Nila Been and Doris Been; brother-in-law, Don Donner; and many beloved nieces, nephews, and a host of friends and other relatives. Naomi was preceded in death by her parents; brother, Edward Minnick; and father and mother-in-law, Harley and Leona Been.