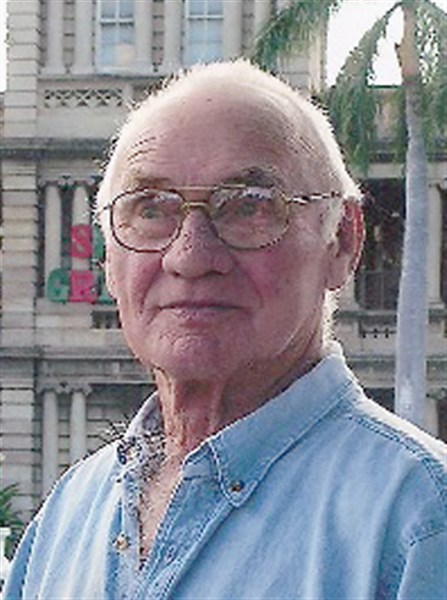 Howard Bryan passed peacefully at his home in North Saint Paul, MN on Thursday, January 7, 2016.  Born January 3, 1930 in Redding, Iowa to Roy and Ruth (Wallace) Bryan, Howard was the second of six sons. He graduated from Mount Ayr Community High School in 1947 and joined the US Navy, serving during the Korean War.  He married Dixie Straub of Salisbury, MO in 1951. To this union four children were born, Rebecca, Howard, John, and Laura.  This marriage later ended. In 1958 Howard married Lenora Davis of Des Moines, IA.  Three children were born to this union, Frederick, Marilyn, and Donald.  He also raised Lenora’s son Steven as his own.  In 1961 they moved to Mount Ayr, IA.

Howard worked in the construction trades, building and remodeling many area homes and businesses.  He also worked for a time at the Mount Ayr Locker.  He was a member of the Mount Ayr Volunteer Fire Department for over twenty years. He was also a member of the Jaycees, American Legion, and Ringgold County Speedway.

In 1987 Howard and Lenora moved to Colorado Springs, CO where he continued in construction. They lived in Round Rock, TX for a few years, to be near his daughters.  In 1993 they moved back to Colorado Springs, CO.  In 2005 they moved to North Saint Paul where Howard and Lenora finally retired. Howard enjoyed woodworking, sports, reading, his family and visiting with friends.

Condolences may be sent to the family at 2074 N. Ivy Street North Saint Paul, MN 55109. There will be a memorial service at a later date. Memorial donations may be made in Howard’s name to the Mount Ayr Fire Safety Club or to your local hospice.