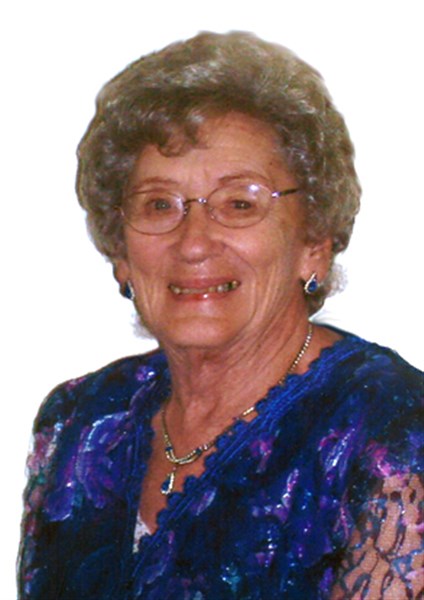 Ruth Marie Downing, daughter of Anna Lela Huff and Joseph Beryl Downing was born in Worth County, MO on a farm they named the White House on October 25, 1928. She went home to heaven at the Ringgold County Hospital on Saturday, January 16, 2016 at the age of 87 years, 2 months, and 22 days. Her long life can be attributed to her deep faith in the Lord and an ornery, stubborn attitude!

Ruth was educated in country schools in Missouri and after finishing the 8th grade, her family needed her on the farm. She helped in the field driving a team of horses, and milked cows. She also helped her mother in the garden, in the house and helped raise her younger brother and sister. She also baby sat with the Waldare children.

Ruth met the love of her life, Robert Wilbur Saville, at the skating rink by dipping her fingers in his water glass and flicking the water on him! Bob and Ruth were married August 4, 1951. They lived in Lawrence, KS, Hopkins and Independance, MO across from Harry Truman’s home before returning to Redding and eventually, Delphos. While in Missouri, Bob went to body school and their daughter, Connie Marie was born November 6, 1954.

Bob and Ruth purchased a small home in Delphos which later became the Delphos Town Hall. Ruth operated the telephone switchboard from this home. She was the last switchboard operator before the dial telephones came in. Their 2nd daughter Tammy Lynn was born December 18, 1958. Ruth and Bob spent many years in and out of doctors’ offices and Blank Children’s Hospital in Des Moines caring for Tammy and her kidney problems.

Ruth accepted Jesus Christ as her Lord and Savior and was baptized at the Delphos Baptist Church by Rev. Norman Noble.

Bob and Ruth purchased the home of Joe and Nancy Humbert in Delphos in 1961. This was a much larger house and it became their permanent home for the rest of their lives. Their 3rd daughter, Nancy Jo was born February 1, 1962.

Ruth was a mom first and foremost. It was always “My Connie, My Tammy, My Nancy and My Bob.” She served as room mother numerous times for her daughter’s school holidays. She served also as their Sunday school teacher, teaching them about the Lord. As an avid seamstress, she made their clothes, prom dresses and wedding attire. She went fishing with them, went for motorcycle and horseback rides with them and friend, Jerry Pritchett. If there was not enough neighborhood kids, she was third baseman. She raised a large garden and cooked delicious meals, chicken and noodles and deviled eggs were her favorite. She was the troll lady for the grandkids, she always left a troll under her bridge for them to find.

After the girls were in school, Ruth worked at the Mount Ayr Cap Factory and furthered her education by taking CNA classes. She later became an in home health care aide with Nurse Force caring for people in Mount Ayr, Lineville and Des Moines.

Bob became ill in 1983 with cancer and Ruth cared for him, never leaving his side until he passed on December 28, 1985. They had celebrated 34 years of marriage at the time of his passing.

After Bob’s death, Ruth learned to drive at the age of 57. Two weeks after getting her license, she drove to Kansas City, MO to care for her ailing parents. In 1986 Nancy delivered Ruth’s first grandchildren, Jason and Shaun Reuter, prematurely. Ruth kicked into action and went to Forrest City to care for Nancy and the boys. While she was there, Ruth’s father passed away and she returned to Kansas City to plan a funeral and care for her mother. At this time, Tammy’s former husband passed away in a terrible traffic accident and once again the Mom in her kicked in and helped Tammy through the grief.

In 2002 Ruth found herself again being mother and caregiver to two of her daughters battling cancer, as she herself had battled when she was 62 of breast cancer. Ruth insisted on caring for Tammy and Nancy until Nancy’s death on July 31, 2007.

Ruth continued to live in her home in Delphos until in August 2015 she was burned over thirteen percent of her body in a gas fire. Given her strong will to live, she fought through the burns, surgeries and pneumonia. She never wanted to leave her girls or her beautiful kitty, Angel. Ruth loved animals. Herbert, Dean, Johnny, Lady, Captain Midnight the neighbor cats and dogs always got a pat on the head and some scraps of food. She loved to read, do search words, discuss politics, and do needle work. All of her children have some of her handiwork.

If you searched the world over you would never find a more loyal, stronger, and tougher woman both physically and spiritually. She had survived several surgeries, broken bones, cancer, a heart murmur, diabetes, high blood pressure, blood clots and severe burns. She used up every bit of her body and finally just wore out, still never wanting to leave us.

She was a wonderful wife, mother, grandmother, great-grand mother and friend.

Burial is in the Redding Cemetery at Redding, IA. A scholarship memorial has been established in Ruth’s name.