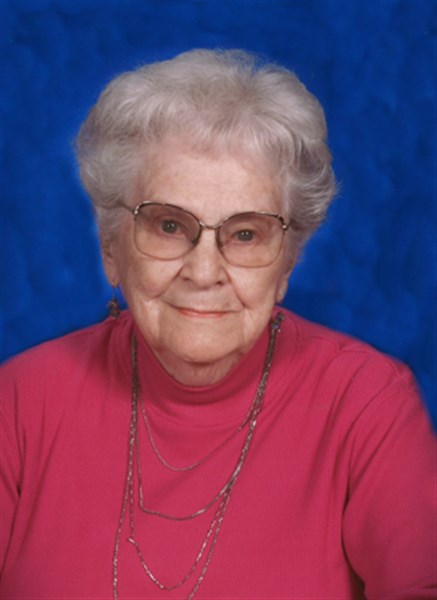 Frances was born on July 26, 1917 to Roy and Goldia Sheumaker on a homestead near Malta, Montana. The family remained in Montana for 10 years and then moved to the Redding, Iowa area where she attended school through 8th grade. She then attended Mount Ayr High School and graduated in 1936.

After high school she taught in a one room rural school in Poe Township. While teaching there, she lived with Lial and Dorothy Saltzman where she met Lial’s brother, Richard, who was to become her husband. During WWII, she attended Iowa Teachers College in Cedar Falls and then taught primary school for 3 years in Arispe, Iowa.   Richard returned from the war, and they were married on May 2, 1945. Frances and Richard lived on his uncle Frank Saltzman’s farm for the first years of their marriage. While living there two daughters were born, Diane and Patricia. They then bought and moved to the farm southeast of Mount Ayr where they remained until 1993 when they moved to Mount Ayr. Frances was a homemaker and helped with farm chores. She was active in the Mount Ayr Methodist Church and various clubs and was a 4-H leader. She also worked for Clearview Homes as an aide and in the activities department. After Richard’s death she returned to Clearview as a resident where she remained until her death.

Frances was much loved and will be missed.