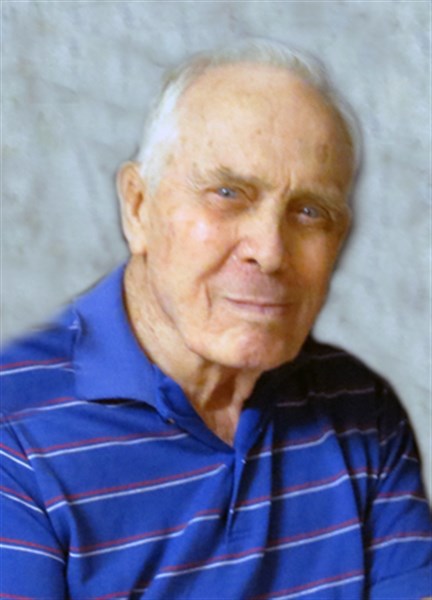 Donald Campbell, 83, of Shannon City passed away March 26, 2016, at the Mount Ayr Health Care Center.  The funeral service was held 11:00 a.m. Wednesday, March 30, 2016, at Trinity Evangelical Lutheran Church in Mount Ayr.  Rev. John Rutz officiated the service.  Burial is in the Rose Hill Cemetery in Mount Ayr.  Open visitation was from Tuesday, March 29, 2016, from 12:00 p.m. to 8:00 p.m., with family present from 6:00 to 8:00, at the Watson-Armstrong Funeral Home in Mount Ayr.  Memorials may be made to the American Legion Post 172, Tingley Community Center, or a charity of the donor’s choice.  Online condolences may be left at www.watsonarmstrongfh.com.
Pallbearers were Cody McKinley, Mark Rasmussen, Wesley Campbell, Austin Campbell, Asa Campbell, Hayden Campbell, Mike Sickels and Curt Campbell. Honorary pallbearers were Royce Dredge, Dennis Sweet, Frank Eighme, Paul Campbell, Gilbert Campbell and Robert Campbell.
Donald Wayne Campbell was born August 15, 1932, in Webster City, Iowa, to Gaius Asa and Verla Marie (Doolittle) Campbell.  He attended Woolstock No. 2 Elementary and graduated from Eagle Grove High School in 1951.
He was baptized and became a member of Lake Lutheran Church in rural Renwick and later a member of the Evangelical Lutheran Church in Eagle Grove.  In 1967 he became a member of First Lutheran Church in Mount Ayr, where he served in many leadership positions and faithfully attended services.
In 1952 Don began farming near Hardy, Iowa, until he was drafted into the U.S. Army in July.  He closed his farming operation in 1953 and served in the Army during the Korean Conflict. Later that year he received an honorable medical discharge due to rheumatic fever.
Don returned to farming near Hardy in 1954.  On February 22, 1958, he was united in marriage to Ethel Rasmussen. In 1960 they moved to a farm south of Eagle Grove.  Don, Ethel, and their three sons, Douglas, Dwayne, and Darwin, moved to the present-day family farm near Shannon City in 1967, where he farmed until his retirement in 2005.
Don was recognized for his contributions to agriculture by his peers and in the show ring while exhibiting cattle and pigs.  He received the Future Farmers of America Iowa Farmer Degree, and the Outstanding Young Farmer Award from the Eagle Grove Junior Chamber of Commerce; he was a Tingley Toppers 4-H Club leader for 10 years, an Honorary FFA Chapter Farmer, a member of the Ringgold County Cattlemen’s Association, a 31-year Paid Up For Life Member of the American Legion in Post 516 in Tingley and Post 172 in Mount Ayr.
Don’s love for farming and the family farm created a lifestyle that gave his family much happiness.  Each day brought him new challenges and opportunities as a steward of the land and of his livestock. He was thankful for the blessings of sunshine and rain, and found joy in watching the crops mature and the animals grow.  In the true spirit of farming, he always looked forward to another farm year, eternally optimistic and self-assured that the current year would be better than the last. He loved to show children and nonfarm friends newborn pigs and tell stories of life on the farm.
Don proudly kept his farmstead up and the weeds down.  In his own way he was an early adopter of new farming technologies, whether it be herbicides, equipment, or farming practices.  Don’s refuge was a large family garden where he patiently raised fruits and vegetables; his forte was raising popcorn. Don loved popcorn and freely gave it away to family, friends, and acquaintances.  While active farming consumed much of his day,  Don always found time for his grandchildren; together they would hone their skills, whether it be fishing in one of his many ponds, playing indoor games, building with Legos, giving rides on the “putt-putt,” or being “the best sled puller ever.”
Don was preceded in death by his parents; his siblings (and spouses) Morris and Joan Campbell, Charles Campbell, and Billy Campbell (in infancy); his father- and mother-in-law, Alfred and Alma Rasmussen; and his, brothers- and sisters-in-law Bernita Westling, Larry and Patricia Rasmussen, and Virgil Rasmussen.
He is survived by his wife, Ethel Campbell; his sons and their wives, Douglas and Dayna Campbell, Dwayne and Karin Campbell, and Darwin and Julie Campbell; his grandchildren, Chelsea (Campbell) and Cody McKinley, Wesley and Megan Campbell, and Hayden and Austin Campbell, Alison, Asa, and Rylie Campbell; his great-grandchildren, Victoria and Kolden Campbell; his siblings and their spouses Marie and Lyle Christensen, Yvonne and Dean Rasmussen, Gilbert and Helen Campbell, Sandra Napier, Robert and Sandra Campbell, and Paul and Jackie Campbell; his brothers- and sisters-in-law Robert Westling, Marianne Rasmussen, Joan Rasmussen, Doris Hanson, and Jerry Hanson; and many nieces, nephews, cousins, and friends.