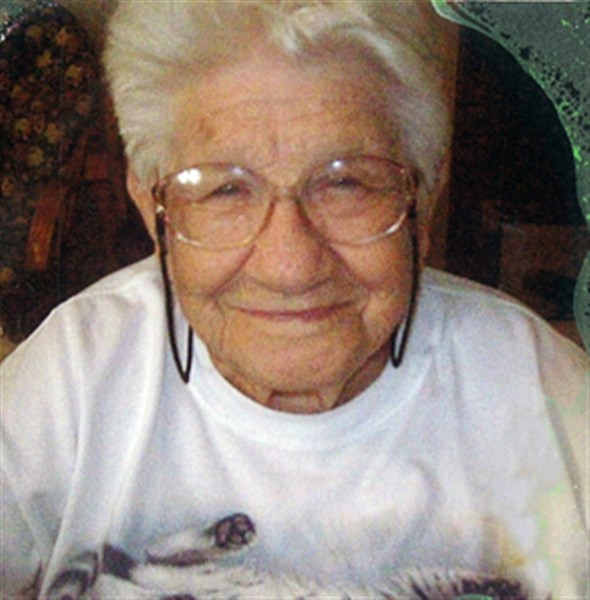 Betty Jo (French) Ruby, daughter of Howard E. and Amy L. Havely French, was born on January 26, 1922 in Monroe Township, Ringgold County. Betty passed away on April 20, 2016 at Mount Ayr Health Care Center at the age of 94.
Betty graduated from high school in 1940 and became fast friends with her future husband, Doyle “Bob” Ruby. Betty looked for a school to teach after graduation but went to work for a restaurant in Kellerton, Iowa until the fall of 1940. The friend who had introduced Bob and Betty was leaving her current job, so Betty got the privilege of taking over her job at the telephone office. That was fine with Betty because then she could marry her friend. Bob and Betty were married on January 17, 1941. Bob and Betty lived with Bob’s folks for a short time and then moved to a farm south of Beaconsfield, Iowa. They were there for one year and then moved to a farm south of Kellerton, Iowa near Lamoni. Eventually, they made their home in Diagonal, Iowa. To this union was born one son, James Doyle Ruby, on September 30, 1942.
Betty, along with being a farm wife and mother, helped Bob in the trucking business. She drove trucks along with Bob delivering soy beans, corn, popcorn and cattle to Des Moines, Iowa, Omaha, Nebraska and St. Joseph, Missouri. She then decided to leave this work up to Bob and went to work at the Greater Community Hospital in Creston, Iowa in the housekeeping department. She worked there, completing one month short of 23 years. Betty also loved genealogy. Betty wrote many histories about families all over the world. If you needed to know anything about family history, just ask Betty. She knew your family better than you knew your family. Betty really enjoyed learning about EVERYONE’S family. Betty also had the job of being Grandma and watching her grandsons, along with her great grandchildren. Betty was “Grandma” to many children and was called Grandma Ruby by the staff at Mount Ayr Health Care Center. Betty was a devoted and loving person and did not know a stranger. She loved carrying on conversations, talking for hours upon hours to anyone.
Betty was preceded in death by her parents; her parents-in-law; her husband, Bob, in 1995; her son, Jim, in 2015; and her great great granddaughter Blakelea Rae Rush in 2015; her sister, Anna Margaret and husband Richard; her sister-in-law, Retha French; her sister-in-law Reva Ruby Wilson and husband Melvin Wilson; and her dear friend, Verba Beck and husband Bob.
Betty is survived by her grandsons, Doug Ruby and wife Melanie and Ron Ruby and wife Terri; great grandchildren, Ashley (Jason) Rush, Kendra Ruby, Layne Ruby, Toby Ruby, Jesse Ruby and Jentri Ruby; great great grandchildren, Cole Ruby, Hadley Rush and baby Rush due in September; brother, William H. French and many nieces, nephews and special friends.
Services were held at the Watson-Armstrong Funeral Home in Mount Ayr, IA at 11:00 a.m. on Friday, April 22, 2016 with Pastor Bill Armstrong officiating.
Casketbearers were Doug Ruby, Layne Ruby, Lonnie Votava, Ron Ruby, Jesse Ruby and Derald Schaefer. Honorary pallbearers were Ashley Rush, Kendra Ruby, Toby Ruby, Jentri Ruby, Cole Ruby and Hadley Rush.
The final resting place is at the Knowlton Cemetery near Diagonal, IA. A memorial fund has been established in her name to be decided later.