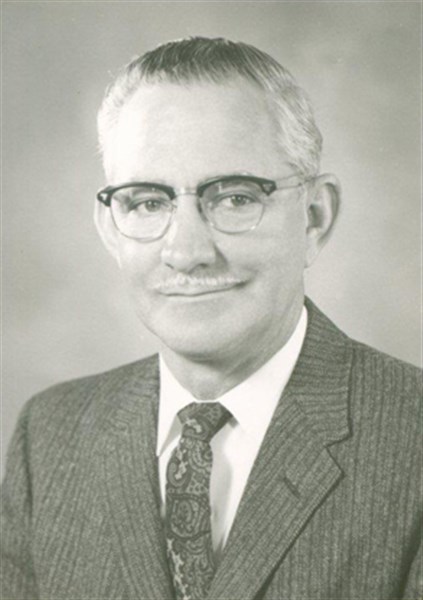 Leo “Jocko” Hacker, age 102 passed away August 26, 2015 in Mesa, Arizona. He was born June 12, 1913 to Roy Hacker and Ida Louise Hosford Hacker on a farm in Ringgold County, Iowa. He was the youngest of five children and the last to join them in the hereafter. He was preceded in death by his parents, brothers, Vern (Vera),  Hod, Cleo (Esther), sister, Velma (Gail) Jarred, first wife Josephine, son Francis and granddaughter, Debbie.
Jocko started school at age five at Ringgold County’s Poe Center School , a one-room school house with one teacher and about 20 students of all ages and grades. He graduated from there and went on to Mount Ayr high school.
Leo’s first job was washing dishes for Mutt Holland at the Midway Café in Mount Ayr, IA.  His future wife Josephine Stuck worked there as the cook. Leo and Josephine were married in Albany, Mo on Dec. 19, 1934.
Leo joined the army in 1944 during WWII. He trained at Camp Robinson and Camp Sill earning a medal for sharpshooting. He served in the Philippines in the Northern Luzon for one and a half years. He started out in Heavy Artillery with the Howitzer 155 cannon and was later transferred to the 422 Rocket Battalion as a gunner.
Leo and Josephine owned many successful businesses in Mount Ayr through the years including the Pure Ice and Coal Company, Midway Cafe, Iowa Cafe, Pool Hall, several farms, West End Market which they built on Highway 2, Hacker’s Paint and Wallpaper, and Hacker Insurance Agency. Jocko was a top selling agent for Life Investors Insurance Company for many years.  He won many awards and trips which he and Josephine enjoyed.
After suffering a heart attack, Leo took up golfing at the suggestion of his doctor.  He became an avid golfer and won many tournaments. When Leo’s doctors told him the long Iowa winters were hard on his health, he and Josephine began to spend the winters in Apache Wells, a retirement community on a golf course in Mesa, Arizona. They were happily married for 49 years until Josephine’s death Nov. 21, 1984.
After Josephine died, Leo married Eleanor Ebert, a personal banker for Arizona Bank in Apache Wells, Mesa, Arizona.  They were married October 15, 1985 in Las Vegas, Nevada. Leo taught her how to play golf, and they golfed several times a week until Leo was well into his nineties. They enjoyed traveling to Alaska and Hawaii and later in their motor home. Leo and Eleanor also enjoyed many summers at their summer home in the mountains in Payson, Arizona.
Leo was an amazing man who always looked younger than his age. He inspired many Iowans to winter in Arizona. Leo leaves to cherish his memory his devoted wife of thirty-one years, Eleanor of Mesa, AZ; his step-children whom he loved, Theresa Luzzi of Chandler, AZ and Bill Ebert Jr. of Phoenix, AZ; grandchildren, Diana (Jerry) Gerlofs of Pinewood, MN  and David (Debra) Hacker of Menahga, MN; step-grandchildren, Nik Luzzi of Chandler, AZ and Kayla Luzzi of Phoenix, AZ, all of whom he loved dearly; nephew, Lyndon Hacker of San Diego, CA; nieces, Leila (Marlin) Niday of Marengo, IA, Juanita (John) Sickles of Mount Ayr, IA and Vernadean (John) Rocha of Jenks, OK as well as many great-grandchildren, great nieces, great nephews and friends.
A Celebration of Life with Military rites will be held at Watson Armstrong Funeral Home Sunday, May 29 at 1p.m. with a reception immediately following at the First Christian Church.