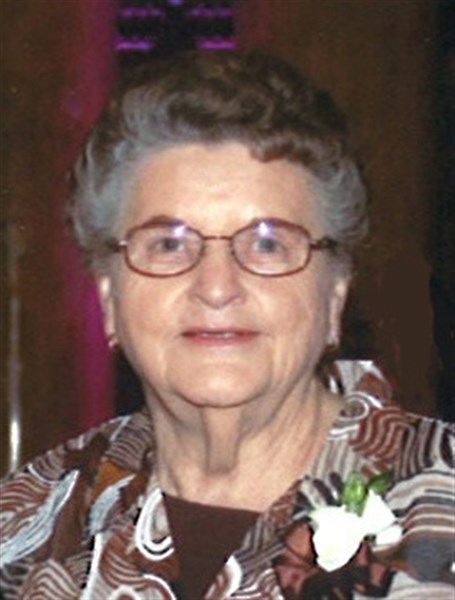 Marlene Joan Giles Zarr was born February 22, 1933, two miles north of Tingley, Iowa to John and Fern (Dunlap) Giles. Marlene passed away at the Mount Ayr Health Care Center on May 27, 2016.
Marlene was baptized as a baby at the Tingley Methodist Church and reconfirmed in 1975 in the Grand River near Westerville, IA. She attended Hackberry Country School until the 6th grade and the Tingley School, graduating in 1951. Upon graduation, she went to Des Moines and worked as a secretary in the Boys Department of the YMCA.
On October 22, 1951, she married Walter Dale Zarr in the Tingley Methodist Church and they made their home in Des Moines. Six months later, Walter was called into the US Army for duty in Korea and Marlene continued working in Des Moines at Paramount Films as a billing clerk until he returned in 1954, and then they moved to their farm northeast of Tingley. To this union three children were born: Michael David, Mindy Diane, and Max Douglas. In 1973, they left the farm to go into the ministry for the United Methodist Church.
Marlene was a cook at the Mount Ayr Schools and the Tingley Center for seven years; she worked at the Tingley State Savings Bank and Hawkeye Bank for 20 years; and upon Walter’s death, she moved to Mount Ayr in 1986 and became Deputy Auditor for Ringgold County until March, 2001. She has since enjoyed her retirement traveling and taking in flea markets, but most of all, enjoying her children and grandchildren participating in their school and everyday activities. Cooking for her family was another love of hers. Her favorite saying was, “What would you like to eat?”
Preceding her in death was her husband, Walter; her parents John and Fern Giles; and her in-laws David and Bessie Zarr.
Left to cherish her memory are her children Michael and companion Candi Campbell of Mount Ayr, Mindy and husband Marty Lesan of Kellerton, and Max and wife Rhonda of Bondurant; four grandchildren Reggie Lesan and wife Emily of Mount Ayr, Rachael Boyer and husband Ty of Urbandale, IA, Casey Zarr of Bondurant, IA, and Laura Campbell of Mount Ayr; two great grandchildren Isaac Boyer and Sawyer Lesan; brother Larry Giles and wife Karon of Mount Ayr; sister Sharyn Betof and husband John of Bluffdale, UT; aunt Raola Giles of Nevada, IA; many nieces, nephews, cousins, and a host of friends.
Memorials are to the United Methodist Church and HCI Care Services, both in Mount Ayr.
Services were held Wednesday, June 1, 2016 at 10 a.m. at the United Methodist Church in Mount Ayr, IA with Rev. Skip Rushing officiating and Debbie Cannon and John Allen providing the music.
Casketbearers were Scott Giles, Josh Betof, Mike Sobotka, Malcolm Eighmy, Mack Greene and David Myers. The final resting place is Tingley Cemetery at Tingley, IA. Arrangements by Watson-Armstrong Funeral Home of Mount Ayr, IA.