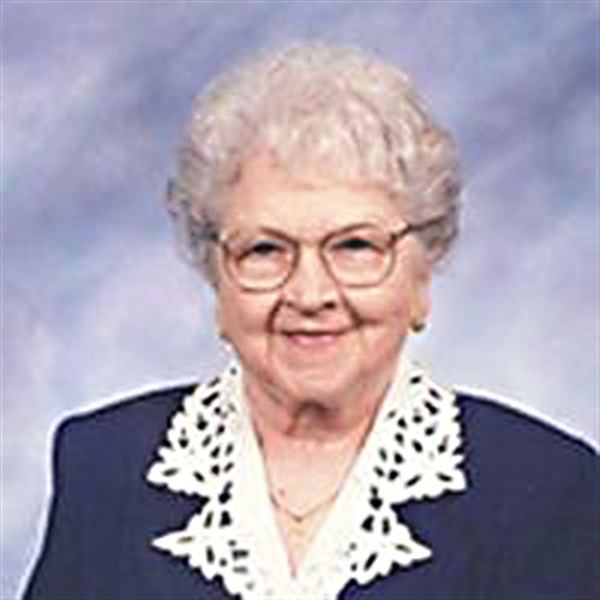 Edna Darline James Adkins, 96, or St. Joseph, MO passed away Friday, June 10, 2016 at home with loving family by her side.
Darline was born February 16, 1920 in rural Ringgold County, Iowa, the daughter of Edmond Howe and Gertrude Humphreys James. She attended schools in Ringgold County.
On April 13, 1940, she was married to Kenneth Duane Adkins, in a small ceremony at Grant City, Missouri. Shortly after they were married the young couple moved to California where they lived in Calistoga located in the Napa Valley. They both worked at the U.S. Naval shipyards at Mare Island. Duane also drove a bus for the U.S. Government during this time. Approximately two years later they came back to Missouri where Duane enlisted in the army. Before their return to Missouri Duane had declined a six-month deferment to enlist, stating he felt a duty to go and fight in WWII.
After his discharge at the end of World War II, Darline and Duane moved to St.. Joseph, where Darline continued her education at St. Joseph Junior college (which eventually became Missouri Western). She went on to graduate from Gard Business University. Following those educational experiences, she went to work for a local ear, nose and throat doctor, and later H & R Block tax preparers.
Darline accepted Jesus Christ as her Lord and Savior when she was 15 years old. She was baptized in the Grand River Ewing Ford north of Allendale, Missouri, along with several other young people. She was a faithful member of Copeland Baptist Church in St. Joseph. Her faith was ever enduring until the end of life, and she always maintained a Christian home for her family.
She was preceded in death by: her husband, her parents, three brothers, Oral, Victor and Phrayne; and one sister, Jessie Washburn.
Survivors include: one sister, Maxine Washburn of Hatfield, MO; two sons, Marvin Adkins of St. Joseph, and Adrian (A.J.) Adkins of Farmington, Arkansas; one daughter-in-law, Laurie Adkins, of Farmington; grandchildren, Brian Adkins of St. Joseph, along with his daughter, Brittany Winder, of St. Joseph, Ben Adkins, Jake Adkins, Annie Campbell and Madeline Hutson, all of Northwest Arkansas; several beloved great-grandchildren, nieces and nephews.
Online condolence and obituary at www.ruppfuneral.com. Internment will be July 11, 2016 at 1 p.m. at the Hickory Grove Cemetery with graveside services.