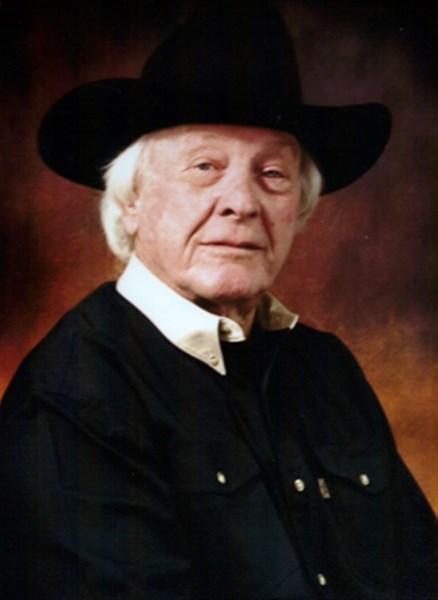 Francis Donald Hughes, 92, of Denver, Missouri, died July 10, 2016 at his home.
Donald was born November 15, 1923 on the family farm near the New Hope Church, Denver, Missouri. He was the son of Francis Walter and Olive Jane (Miller) Hughes. He attended rural school near his home then began the several mile walk to school in Denver in later elementary. He graduated from the Grant City School District.
Donald completed post graduate training in Chicago, Illinois learning to assemble aircraft. He then moved to Kansas City to work for Northrup Grumman assembling B-25’s for the war. He lived in a boarding house with other young men involved in the war effort. He joined the United States Navy in March of 1944 and became a diesel engineer on the Navy Destroyer USS Engstrom. Donald was honorably discharged from naval service on April 27, 1946.
Following his discharge, he returned to the family farm and married Loreen Helen Jay on December 21, 1946. Donald began a diverse farming operation of his own raising cattle until he was 90 years old. He began a custom harvest operation following the wheat harvest each summer for 14 years.
In 1991, Donald married Charmayne with whom he enjoyed owning and operating the Bar X Restaurant in Denver, Missouri. Donald and Charmayne enjoyed extensive travel including his favorite trips to the Lake of the Ozarks, 26 consecutive trips to Sturgis as a Harley Davidson motorcycle enthusiast, the National Finals Rodeo in Las Vegas for over 30 years, and various trips to watch car racing across the country.
Donald was especially proud of his naval service, contract work for the government building over 70 watershed projects, his service on various local boards, including the Rural Water Board, where he served as President for over 50 years. He held a patent for one of the first large hay bale stabbers for farm pickups. Donald held a pilot’s license and enjoyed racing cars.
Others preceding him in death were his parents, Francis and Olive, his wife Loreen Helen Hughes, brothers Glenn and William Hughes.
His survivors include: his wife Charmayne of the home, Denver; daughter Donna (Jeff) Pile, Albany, Missouri; granddaughter Whitney (John) Cooney and great grandson John Donald “Jack” Cooney, St. Louis, Missouri; stepson Sterling Kidd, 2 step grandsons, Kalen and Sage, all of Wichita, Kansas; and many nieces and nephews all of whom held a special place in his heart.
A Celebration of Life will be held at 5:30 p.m., Thursday, July 14, 2016, at the Missouri National Guard Armory in Albany, Missouri. Family and friends are encouraged to stay for dinner following the service.
A private family burial will be held in the Miller Cemetery, Denver, Missouri.
There is a memorial established for The Denver School Belfry Reconstruction project.
Online condolences maybe left at andrewshannfuneralhome.com