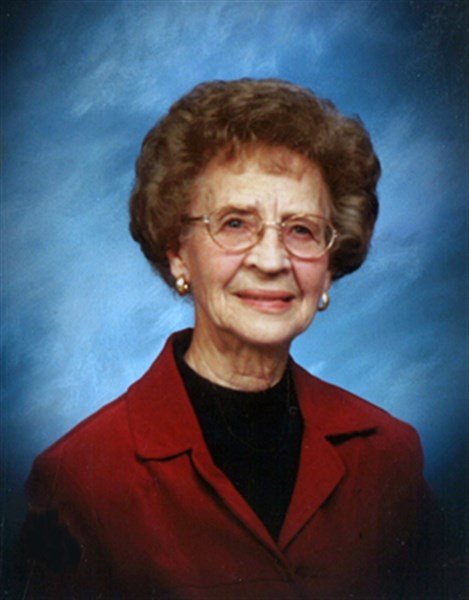 Darlene Ricker, 94, passed away July 29 at the Clearview Home in Mount Ayr. Darlene was born September 5, 1921 in Prescott, Iowa, to Harold and Berneice Schaefer. Upon the death of her mother, at age 10 she and her brothers and sister were raised by grandparents Luther and Lillie Madison. She graduated with the class of 1939 from Mount Ayr High School, passed her teaching certification and began teaching at Washington #6 country school. On August 22, 1940, she married Eldon Ricker and after farming on two Ringgold County farms, they purchased the Ricker home farm in 1947 and lived there until retiring to Mount Ayr in 1995.
Darlene loved the farm life and helped with all the farming activities. In addition to raising a family she was an accomplished seamstress, maintained a garden, raised chickens, and canned fruits and vegetables. Darlene and Eldon enjoyed their neighbors and continued with the local card club for many years. She spent many hours quilting at home and with friends at the Diagonal church. Golf became a passion for Eldon and Darlene and they truly enjoyed the Mount Ayr Country Club. She played into her 90s and was always a fierce competitor. Losing was not an option. She worked in the Mount Ayr Factory as a sewing machine operator, time study analyst and supervisor. Throughout her  lifetime, she was involved with both the Diagonal Presbyterian Church and the Mount Ayr First Christian Church.
She was a strict disciplinarian for grammar, manners, honesty, neatness and education. There was never a doubt about her position on any of these items. She set high standards and lived by them every single day.
Darlene is survived by daughter, Karen (Ed) Brown of Maryville, MO, son, Gene (Vicki) Ricker of Ankeny, IA, six grandchildren, Mike (Regina) Ricker, Angela (Paul) Bickford, Heidi (Larry) Blackstun, Amy (Jim) Suedmeier, Greg (Cathy) Brown, and Rachel (Bart) Tatum, twelve great grandchildren, Nicole and Reece Bickford; Connor and Kennedy Brown; Alec, Miles and Matthew Tatum; Daniel, Timothy and Caitlin Ricker; Tyler and Cory Suedmeier, and brother, Bob Schaefer, along with several nieces and nephews.
She was preceded in death by husband, Eldon; sister, Thressa and husband, Don Willey; brother, Lowell and wife, Maxine Schaefer; sister-in-law, Betty Schaefer , nephew, Randy Schaefer, and great-grandchild, Maximus Tatum.
Memorial funds will be established by the family for the HCI Hospice and the First Christian Church.
Services were held at the Watson-Armstrong Funeral Home in Mount Ayr, IA on Wednesday, August 3, 2016 at 11 a.m. with Pastor Darin Dolecheck officiating and Nancy Sackett and Dr. Collus Lawhead providing the music.
Casketbearers were Michael Ricker, Angela Bickford, Heidi Blackstun, Amy Suedmeier, Geg Brown and Rachel Tatum. Honorary pallbearers were Daniel Ricker, Nicole Bickford, Connor Brown, Timothy Ricker, Tyler Suedmeier, Caitlin Ricker, Alec Tatum, Cory Suedmeier, Kennedy Brown, Reece Bickford, Miles Tatum and Matthew Tatum.
The final resting place is at the Bohemian Cemetery at Diagonal, Iowa.