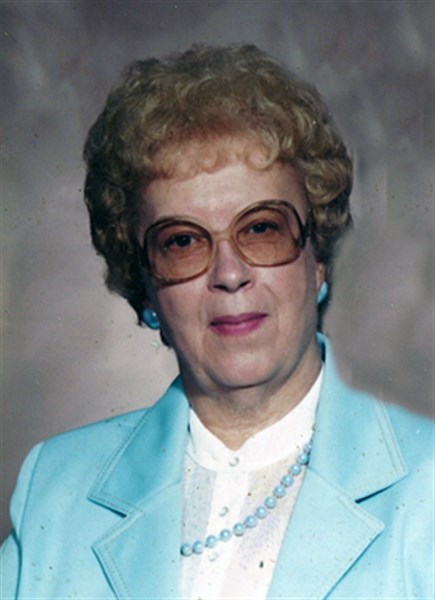 Dorothy Jean (Symonds) Baker was born February 11, 1929 to Ernest and Florence (Ray) Symonds. She was welcomed home by sister Darlene. Later the family welcomed brothers Dean and Tommy. Dorothy graduated from high school in Lenox, Iowa with the class of 1947. She attended summer school and began teaching that fall. Dorothy taught country school until she married Gerald H. Baker on December 26, 1948. Sixty-four years later, grandson Ethan married Amelia Michelle White on his grandparents’ anniversary.
Dorothy was a devoted farm wife and she and Gerald raised two sons; Jerry (wife Mary) and John.  Dorothy and Gerald remained on the farm located two miles north and two miles east of Clearfield until 1999 when they moved into Clearfield.
Dorothy was a good cook but did admit that was not the case when first married. While growing up, she spent more time outside with her father rather than inside with her mother learning to cook. Although her cooking definitely improved, you never wanted to ask her for a recipe because she has most likely changed something.
Dorothy also enjoyed sewing, crocheting and knitting. She would spend hours working logic puzzles and even mastered the Rubics Cube!
In the 70s Dorothy sold Sarah Coventry Jewelry all over southern Iowa and northern Missouri and was quite successful at it.
Dorothy and Gerald were fortunate enough to travel to Europe twice to visit their son, John who is an Electronic Engineer in England.
After Gerald’s passing in June 2013, Dorothy unofficially took over as “Head of the Farm.” She did her best to try and keep up with grain prices, weather and farm markets. She was always asking Jerry how things were going on the farm. Now grandson Caleb is farming his grandparents’ farm and will soon move into the family farmhouse. Ethan is taking over with the cattle which grandpa enjoyed.
Dorothy’s greatest accomplishment were her grandsons, and she eagerly stepped into that next milestone when she became a great-grandmother to Abigail Marie Baker. Shortly before her passing she spent time with her family and smiled as she watched Abby show off some of her dance moves.
Dorothy passed peacefully on September 9, 2016 surrounded by her family at Clearview Home in Mount Ayr.
She was preceded in death by her husband Gerald;  sister, Darlene; brother, Dean; infant daughter, Connie Kay.
Left to cherish her memory are; two sons, Jerry (wife Mary) Baker of Clearfield and John Baker of England; two grandsons, Caleb Baker and Ethan (wife Amelia) Baker and great-granddaughter, Abigail Baker all of Clearfield; one brother Tommy and wife Sharon of Hancock, Iowa; many nieces, nephews, family, and friends. Armstrong Funeral Home of Clearfield and Mount Ayr is in charge of the arrangements.
Services were held on Wednesday, September 14, 2016 at 1 p.m. at the United Methodist Church in Clearfield, Iowa with Rev. Michael Shaffer officiating and Patty Parrish and Chantelle Jennett providing the music.
Casketbearers were Caleb Baker, Ethan Baker, Craig Baker, Galen Baker, Marvin Baker and Dennis Doggett. The final resting place is Clearfield Cemetery at Clearfield, Iowa. A memorial fund has been established in her name to be decided later.