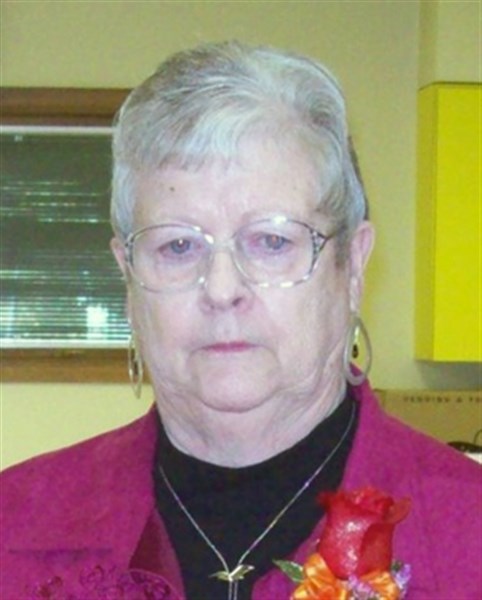 Helen Maxine Garner Tridle was born to Marion and Mildred Mayo Garner on October 21, 1935 in a one room bunkhouse in Atchison County Missouri near Rockport. Maxine was met at home by brother Bill and sister LoDean. The family soon moved to Springdale, Arkansas where brother Harold was born. The family moved to the Benton farm a year later where brother Ryland and sister Bonnie was born. The family moved to Delphos in 1947 where sister Sue was born.
Maxine graduated from Delphos in 1953. After graduation, Maxine attended Americana Beauty School in Des Moines. Maxine was so good at cutting little kids’ hair that she was part of the advertising on the radio and TV. She continued to cut hair even after she went to work at Interstate Insurance as a data processor.
Maxine’s brother, Harold was William Tridle’s best friend. Harold played cupid by asking them both to a dance in Maloy, Iowa and the rest is history. Maxine and William were married on December 12, 1970 at the Christian Church in Diagonal, Iowa. That day she gained more than a husband, she gained a family including four children Deanna, Bill, Rhonda, and Scott. They all lived in the two story farm house west of Orient where Maxine and William still lived today.
In 1981, Maxine started selling Avon. Avon was a big part of her life and she had many adventures with Avon. This is when Avon Manager Margaret Palmer became her best friend. She was especially proud of making the Avon President’s Club for 26 years in a row. Maxine also worked at the Orient-Macksburg Public Library and the Bank of Memories in Orient.
Maxine loved a full house. There were always brothers, sisters, nieces, and nephews staying with them. She loved having the grandchildren come to stay and stay they did. Sometimes Katie and Kasey Feick would stay a week at a time in the summertime. Maxine got lots of joy from Facebook as it was the best way to catch up on all the gossip, and keep track of family and friends. She enjoyed shopping trips with her nieces and spending time with her grandchildren, especially when they played Avon using up all her order books.
Maxine passed away on September 29, 2016.
Maxine is survived by husband William Tridle; children Deanna McDowell, Bill Tridle, Rhonda Feick, and Scott Tridle; brothers Harold Garner and Ryland Garner, sisters Bonnie Ward, Sue Carson; grandchildren Tonya Richman, Tosha Shelley, Cassie Holmes, Matthew Morse, Ashly Jeralds, Marcus McDowal, Alina Tridle (Seth and Maci Jo), Jordan Tridle, Whitney Tridle, Katie Bauer (Alex and Chase), and Kasey Dredge (Derrick, Darsey, Daisey and Draven); 14 great-grandchildren, and many nieces and nephews and many great nieces and nephews.
She was preceded in death by parents Marion and Mildred Garner; brother Bill Garner and wife Betty; sister LoDean Garner; grandson Willie Tridle; nephews Kenny Carson, Ronnie Garner, and Tony Garner.
Per her wishes, Maxine was cremated and there are no public services scheduled. A memorial fund has been established for the First Responders at Orient, Iowa. Armstrong Funeral Home in Mount Ayr is in charge of the arrangements and online condolences may be left at www.armstrongfh.com.