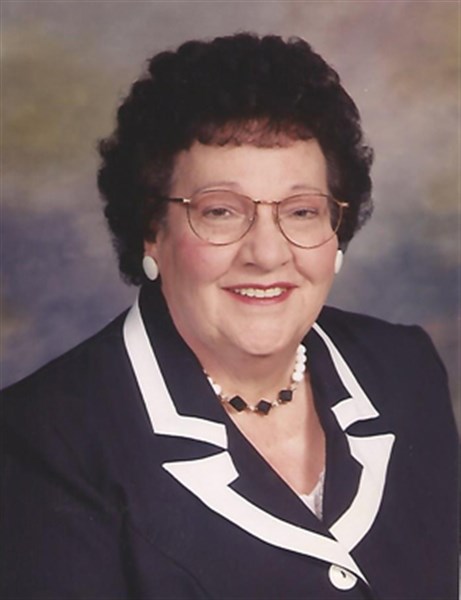 Theola Maxine (Monk) Cameron, the daughter of Claude Edward Monk and Eva L (Greer) Monk was born on March 4, 1930 on a farm near Clearfield, Iowa. She was the third born child to Mr. and Mrs. Monk out of six children. Theola passed away on October 9, 2016 at the Clearview Home in Mount Ayr.
Theola attended Clearfield Community School where she was the youngest in her class because she never went to kindergarten. There she was known for always obtaining excellent grades. She went on to graduate from Clearfield High School in May of 1947. On September 13, 1947, she was united in marriage in Maryville, Missouri to Lloyd Eugene Cameron. Theola gave birth to their first child, Tracy Eugene Cameron, on July 24, 1952. Theola gave birth to their second child, Robert Alan Cameron, on August 31, 1956. She was a stay at home mom and wife until 1960, when the group of four moved from the farm to a house on the northwest side of Clearfield.
On August 25, 1961, she gave birth to their third child, Martin Craig Cameron. Finally, on March 2, 1964, Kelly Sue Cameron was born to make the Cameron family whole. Theola worked at the Post Office for a time, also the Princess Theater in Clearfield, as well as the Clearfield School, alongside her husband Lloyd, until his death in 1983.
Theola was a kind, loving, and devoted mother throughout her life, also a loving caring grandmother to all her grandkids and great-grandkids. She will be missed by them all. She loved to joke and could do it with best of them.
Survivors include her children, Tracy and wife, Cindy of Lenox; Robert and wife Marie of Creston; Martin and wife Shawn of Diagonal; and daughter, Kelly and husband Kyle Freshour of Lenox; six grandchildren Tori and husband Wayne Grantz of DeWitt; Shannon and husband Matt Grove of Hillsboro, North Dakota; Chris Cameron of Creston; Levi Cameron of Des Moines; Taylor and husband Bradley Bentley of Diagonal; and Bailey and husband Dillon Drake of Diagonal; three great-grandchildren, Hannah and Katie Grantz and Quinn Bentley; and three siblings; brother, Ronald Monk and wife Bev of Marshalltown; sister, Phyllis and husband Jack Gourley of Lenox; brother Paul Monk and wife Barbara of Des Moines.
Preceding her in death were her husband, Lloyd; parents, Claude and Eva Monk; mother-in-law, Ellen Cameron; brothers, Cecil and Darrell Monk; and sisters-in-law Bertha Monk and Lucille Miller.
Services were held on Tuesday, October 11, 2016 at 2 p.m. at the Clearfield United Methodist Church with Rev. Michael Shaffer officiating.
Casket bearers were Tori Grantz, Shannon Grove, Chris Cameron, Levi Cameron, Taylor Bentley, and Bailey Drake. Honorary casket bearers were Bob McMath, Shirley McMath, Jack Gourley, Lois Wurster, Dillon Drake, and Bradley Bentley, Matt Grove, and Wayne Grantz.
The final resting place is North Fairview Cemetery at Lenox, Iowa. Memorials to be established in Theola’s name.