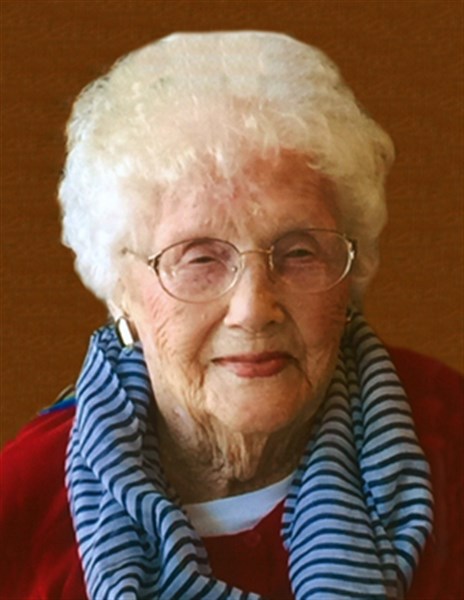 Evelyn, daughter of Elvin and Myra (Griffith) McMath, was born near Drakesville, Iowa on March 30, 1910 and later moved with her family to Clearfield, Iowa. After graduating from Clearfield High School, she taught in the rural schools for several years. On December 21, 1934 she was united in marriage to Dwight Morey. Four children, Jim, Ed, John and Myrabel were born to this union.  They farmed north of Clearfield before moving to town and operating Morey’s Variety Store. After Dwight passed away in 1953, Evelyn continued operating the the store for some time before it closed. She then became employed with the Clearfield Community School as secretary to the superintendent and board secretary, positions she held for seventeen years.
On September 17, 1978 she married Joe Stevenson. She and Joe spent many of their retirement years traveling, visiting children and grandchildren, attending school activities in Lenox and enjoying their many friends in Clearfield. In 2004 they moved to Clearview Nursing Home. Joe passed away in 2006.
Evelyn passed away at Clearview Home in Clearfield, Iowa on October 14, 2016.
Left to cherish her memory are her sons Ed (Georgia) Morey, of Bentonville, Arkansas, John (Donna) Morey of Shenandoah; daughter Myrabel (Allen) Lillie of Mesa, Arizona; daughters-in-law Joye Morey of Highlands Ranch, Colorado and Shirley Morey of Fort Collins, Colorado; stepdaughters Donna (Marion) Keenan of Bolivar, Missouri, Jeannine (Guy) Hampton of Leon and Judy (Bill) Mozingo of Grant City, Missouri. She is also survived by ten loving grandchildren Jill, Lisa, Jana, Holly, Sarah, Jeff, John M., David, Mike and John L.; eight great-grandchildren and seven great-great-grandchildren. In addition she is survived by many loving nieces, nephews, cousins and friends, and especially her adopted family at the Clearview Nursing Home, who she loved dearly.
Preceding her in death were her parents; two husbands; son James Morey; sisters Myrtha Nelson, Margaret Colton and Wilma McMath (in infancy); brothers-in-law Harley Nelson and Merle Colton.
Visitation will be held at the Clearfield Christian Church in Clearfield, Iowa on Thursday, October 20 from 9:30 a.m. to 10:30 a.m. with services beginning at 10:30 a.m. Burial is in the Clearfield Cemetery. Casketbearers are John Morey, Jeff Morey, John Lillie, Chris Chenowith, David Morey, and Nick Collins. Memorials may be made to the Clearfield Library or a memorial gift at Clearview Home. Armstrong Funeral Home of Clearfield and Mount Ayr is in charge of the arrangements and online condolences may be left at www.armstrongfh.com.