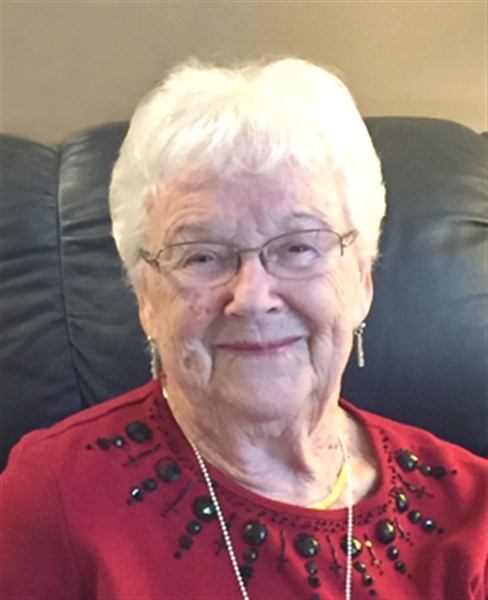 Marjorie Eloise Davis, 92, of Ames, died Monday, November 21, 2016 at Mary Greeley Medical Center in Ames.
Marge was born December 20, 1923 to Orville and Velma (Hewitt) Bentley in Lenox, Iowa. Marge grew up on her parents’ farm in Diagonal, Iowa. She graduated in 1942 from Diagonal High School which is where she met her husband, Keith E. Davis. She then earned a two-year teaching certificate from Northwest Missouri State. In 1944, Marjorie and Keith were married just prior to his service in the Army during World War II. While stationed in Europe, they maintained a steady correspondence. After the war, they raised four children and lived in Creston, Red Oak, Decorah, and Mason City before settling in Ames. Keith was the Contracts Engineer with the Iowa DOT and Marge worked as a teacher’s aide at Kate Mitchell Elementary School.
The family’s camping vacations to western National Parks and the Pacific northwest became a source of vivid memories. In Ames, Marge became a skilled quilter and was devoted to her many friends and her eight grandchildren. Following retirement, Marge and Keith spent many winters in Pharr, Texas, where they formed new friendships and enjoyed warmer weather. When they were no longer able to go south for the winter, they enjoyed socializing with their longtime friends and neighbors in Ames. Marge and Keith were privileged to enjoy 66 years together.
Marge is survived by four children, Tish (Bill) Cook of Greenwood, MN, Steve (Deb) Davis of Bondurant, Linda Silka (Larry Smith) of Orono, Maine and Mark (Kathy) Davis of Ames; seven grandchildren, Molly Toot, Amy Healey, Ian Davis, Chad Cook, Kelli Stuckart, Jesse Davis and Emily Nutsch; and seven great-grandchildren, Sarah, Margaret, Ben, Kennedy, Josie, Ephram, and Freya.
She was preceded in death by her parents; her husband, Keith; two brothers; one grandson; and one grandson-in-law.
In lieu of flowers, the family requests memorial contributions to the Alzheimer’s Association or the Ames Public Library.
Adams Funeral Home in Ames is assisting the family with arrangements. To share condolences and photos visit www.adamssoderstrum.com
Funeral services were held at  2:00 p.m. Friday, November 25 at Adams Funeral Home in Ames with a visitation one hour to prior the service. Burial followed at Ames Municipal Cemetery.