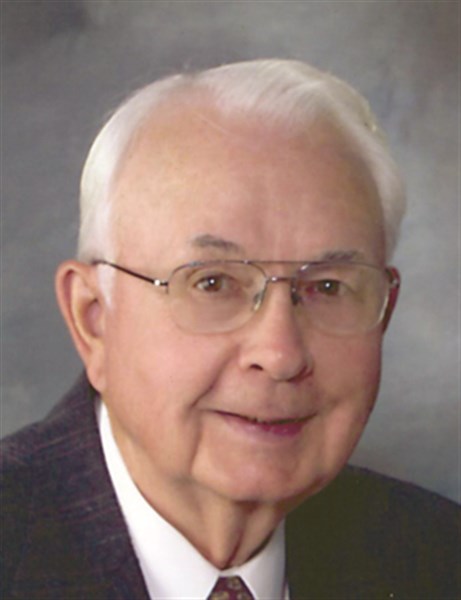 Rev. Dr. Weldon Austin Whitenack, age 90, of Washington, Iowa, died Saturday, November 26, 2016, at the Washington County Hospital following a brief illness.
Weldon was born September 4, 1926, in Deerfield, Indiana, the son of Benjamin Franklin and Hazel (Ross) Whitenack. He attended school in Deerfield, Indiana, graduating from Jefferson High School in 1944. He served honorably in the United States Army during World War II. Weldon continued his education at Taylor University and Purdue University. He received his Masters of Science and Agriculture from Iowa State University in Ames. He attended Asbury Theological Seminary and received his Master of Divinity from Garrett Theological Seminary. Weldon was awarded an Honorary Doctor of Ministry from Iowa Wesleyan College.
Weldon’s service with the Methodist Church started in Zoar, Indiana. After moving to Iowa he preached at Redding, Iowa from 1950-1954; and preached at Diagonal and Benton for two years.  He served the Portage Park Methodist Church in Chicago from 1956-1958, and then moved back to Iowa to serve the Moravia, Iowa, Wesley Chapel and Fairview churches until 1962.  He served the Simpson United Methodist Church in Des Moines from 1962-1971 and was appointed the District Superintendent of the Muscatine District where he served from 1971-1977.  Weldon served the First United Methodist Church of Marshalltown from 1977 until 1984 and then served as District Superintendent of the Des Moines District from 1984 until 1990.  He then moved to Cedar Falls, Iowa, where he was Chaplain of the Western Home Retirement Center until 1996.  He and Marilyn retired to Washington, Iowa, in 1996.
Weldon is survived by his wife, Marilyn Whitenack of Washington, Iowa; daughter, Debra Bachman of Washington, Iowa; daughter, Linda Soukup of Washington, Iowa; son, Mark Whitenack of Minneapolis, Minnesota; and three grandchildren: Leah Soukup, James Soukup and Kaylene Bachman.
He was preceded in death by his parents; one grandson, Wyatt Soukup; and ten brothers and sisters.
Funeral services will be held 11:00 a.m. Friday, December 2, 2016, at the United Methodist Church in Washington with Rev. Dr. J. Robert Burkhart, Rev. Ben Blanchard and Rev. Julie Poulsen officiating.  Calling hours will begin at noon Thursday at the Jones and Eden Funeral Home.  The family will receive friends from 6:00 p.m. until 7:30 p.m. Thursday at the Jones and Eden Funeral Home and from 10:00 a.m. until 11:00 a.m. at the United Methodist Church.  Interment will take place at the Elm Grove Cemetery in Washington, Iowa.  In lieu of flowers, a general memorial has been established.  Online condolences may be sent for Weldon’s family through the web at www.jonesfh.com