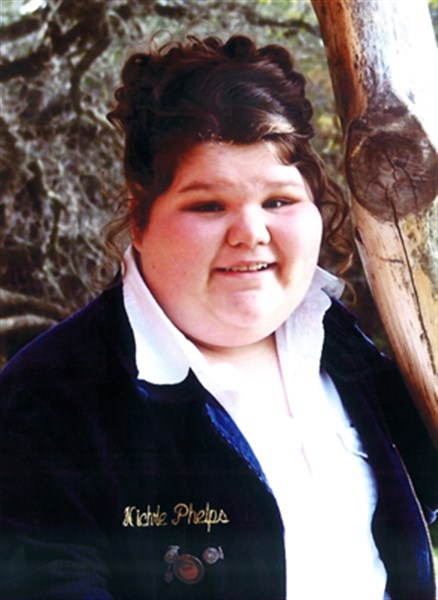 At the Decatur County Hospital in Leon, Iowa, on April 5, 1994, Jeremy and Donetta (Reed) Phelps brought into this world a beautiful baby girl, and they named her Nichole Rose Phelps. Nichole was welcomed home by big sister, Ashley, and together, they will always be big sisters to Bradley and Brice.
From day one, Nichole overcame many challenges and obstacles. From a rough start at birth, to being legally blind, to being told she would never walk to having a blood disease, a broken leg and cerebral palsy all by the age of 2. But none of this slowed her down. She took every challenge head on. Perseverance, courageous, bubbly, genuine, determined, and full of love are only a few words to describe Nichole.
Nichole started her school career at an early age of 3 in Lamoni Community schools where she attended through the third grade. While in Lamoni, Nichole played in T-ball, danced in ballet, played the violin and became a Shriner kid.
Nichole joined the Mount Ayr Community School family in fourth grade, where her community and school involvement grew. Nichole loved being involved and a part of everything such as 4-H, Awanas, Rainbow, choir, FFA, State FFA Choir, cheerleader, school plays, track, softball manager, bowling, youth leadership, FCLA, camps and camp counselor.
Nichole graduated from Mount Ayr High School in 2012. She attended the Dept. for the Blind and entered into A.I.B. College in Des Moines. Nichole graduated from A.I.B. in May of 2016 with her associate’s degree in Business Administration. She made Des Moines her home and continued in the Rainbow organization where she was able to become Worthy Advisor before her term was up.
Nichole had a servant’s heart and volunteered at the homeless shelter on Thanksgiving for several years.
Nichole loved her Lord and she maintained a personal relationship with Jesus. Nichole was proud to offer the blessings over food at family gatherings and knew and quoted her Bible.
Nichole was courageous and determined with a compassionate and caring personality. On December 18, 2016, Nichole quietly passed away and entered into the presence of her Lord and Savior.     She was preceded in death by her great grandparents George and Cleo Phelps, Glenn and Doris Reed, Arless and Lucille Joy, and Mildred Smith; grandpa Donald Reed; uncle Jackie Donald Reed and aunt Penny Kay Reed; cousins Jerry Phelps and Jake Phelps.
Those who will forever treasure her memory include her parents Jeremy and Donetta Phelps; her sister Ashley Smith and husband Josh; brothers Bradley and Brice Phelps; grandparents Verlin and Brenda Phelps and Verna May Reed; aunts and uncles include Sheila Phelps, Tammy (Rich) Thomas, Verlin (Stephanie) Phelps, Jr, Nick (Carrie)Phelps, Ed Reed, Rod (Kathy) Reed, Clinton (Shelly) Reed, Derick Reed, Bryan Reed, and Andrea (Jack) Silsby; numerous cousins and other relatives; and many, many friends. A memorial fund has been established in her name to be decided later. Online condolences may be left at www.armstrongfh.com.
Services were held on Friday, December 23, 2016 at 11 a.m. at the Armstrong Funeral Home in Mount Ayr, Iowa with Pastor Bill Armstrong officiating. Music was provided by Nancy Sackett, Carol anne McCreary, Grace Warin, Barbie Belzer and Jodie Wurster.
Honorary pallbearers were Byron Jimmerson, Wyatt Sloan, Arless Bailey Sloan, Jacob Phelps, Nicholas Ryean Phelps, Hagen Phelps, Shelton Reed, Austin Reed, Kaleb Reed, Orrey Reed, Zachary Cunningham, Andrew Reed and Jacky Silsby.