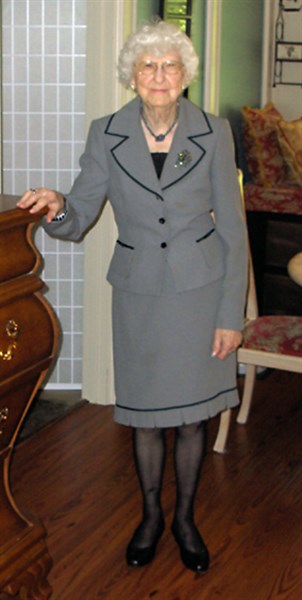 Alberta Nadine (Power) Glazebrook, daughter of William Hull Power and Hallie (Vaught) Power, was born on a farm near Humboldt, Nebraska, May 12, 1921, and departed this life January 5, 2017, at the age of 95, following a short illness. Her schooling, K-12, was at Humboldt Public School, from which she graduated in 1939.
She was united in marriage to Charles Donald Glazebrook on October 14, 1940, at Sigourney, Iowa. To this union three children were born: Sharon, Rex, and Connie Jo. Most of their married life was spent at Grand River, Iowa, although employment took them to South Dakota, Tennessee, Nebraska, Missouri, and Texas.
Their children hosted an open house for them on the occasion of their 50th wedding anniversary, on October 14, 1990, at Grand River United Methodist Church in Grand River, Iowa.
Alberta was an active member of the Grand River United Methodist Church and held many offices in the church such as Sunday School, Women’s Society of Christian Service, and United Methodist Women.  She was Charge Secretary for the Kellerton-Beaconsfield-Grand River United Methodist Church for 13-1/2 years, served as City Clerk/Treasurer for the town of Grand River for two years, and managed apartments in Houston, Texas, for four years. She was an avid reader and volunteer in the church and community. In 2011, at the age of 90, she moved to Goodrich, Texas, to make her home with daughter Sharon, where they enjoyed highly competitive games of Scrabble and Yahztee, and worked many jigsaw puzzles. She also enjoyed going to lunch with Sharon, Rex and wife Julie prior to an afternoon of antiquing. Following the Texas move, she transferred her church membership to Goodrich First United Methodist Church and attended regularly, capably driving herself to church until just a few weeks before passing.
She was preceded in death by her parents, her husband of 63-1/2 years, Charles, two sisters, three brothers, several brothers-in-law, and sisters-in-law.  She is survived by daughters Sharon Lloyd, Goodrich, Texas, and Connie Leeper and husband, Carl, Des Moines, Iowa, and son Rex Glazebrook and wife, Julie, Onalaska, Texas.  She is also survived by two granddaughters, Tina Onken and husband, Darrell, Cambridge, Iowa, and LaRita Arterburn and husband, David, Des Moines, Iowa, and one grandson, Shane Charles Glazebrook and wife, Kristy, Houston, Texas, as well as four great-granddaughters: Nicole Kaileen Onken, Jessica Eileen Onken, Haley Madison Glazebrook, and Kiara Anne Arterburn, and great grandson Jacob Allen Tuller, as well as step granddaughter Lisa Boess, San Bernadino, California; three step great-granddaughters, Cierra Boess, Oak Hills, California; Ryan Wieser, Houston, Texas; Melissa Arterburn, and step great-grandson, Daniel Arterburn, Eugene, Oregon; nieces, nephews, and other relatives and friends, all of whom she was very fond.
Per her request, her ashes will be interred beside her beloved husband, Charles, at Westerville Cemetery, Grand River, Iowa, in a graveside service “on a bright, balmy day” to be announced later.  If desired, memorial donations in her memory may be made to The American Cancer Society, St. Jude’s Children’s Research Hospital, or M.D. Anderson Cancer Center.  The family thanks everyone for their kind expressions of sympathy.