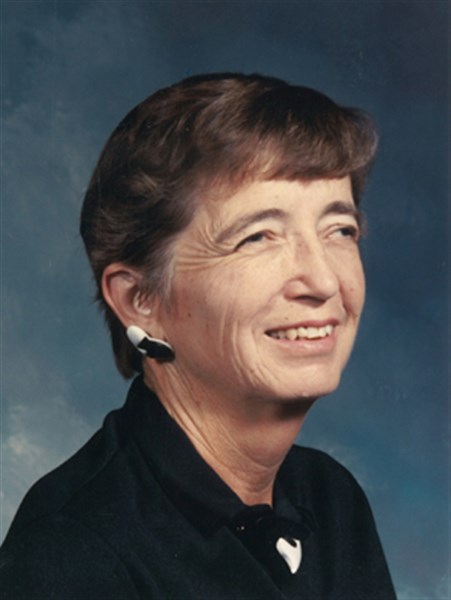 Sheryl Virginia Keenan, daughter of Elmer Eric and Edna May (Ham) Henderson, was born at Waukee, Iowa on November 30, 1925. Sheryl’s dad passed away when she was 6 years old and the family continued to work the farm.
At the age of 16, Sheryl graduated from Van Meter High School in 1941. Sheryl went on to further her education at Drake University where she graduated in 1944 with an Elementary Teaching Certificate, eventually earning her Bachelors of Science in Education. Sheryl began teaching at Cambridge, Iowa in 1944 and taught at Van Meter School from 1947 to 1951.
She taught in Lenox School from 1951 to 1954, and it was at this time that she met her future husband, Lee Keenan. They were married in Bedford, Iowa on December 28, 1953. Sheryl and Lee moved to a farm near Maloy, Iowa where they would live out their married years together.
Sheryl took some time off from teaching to become the mother to three daughters: Lynn, Cheri, and LeAnn. In 1963, Sheryl returned to teaching first grade at Mount Ayr Community School, retiring in 1990. After Lee passed away on March 27, 1995, she moved to Waukee, Iowa.
Sheryl enjoyed learning and keeping her mind active. She was an avid reader who enjoyed crosswords and adult coloring. She loved to play cards and was quite competitive. Sheryl had a love for good blueberry pancakes and she always ate her dessert first! Most of all, Sheryl enjoyed being around people. She enjoyed coffee with her friends. She looked forward to the Henderson family reunions and keeping up with the many relatives. She loved spending time with her grandchildren and great-grandchildren and attending their many activities. She never missed a chance to be at their dance recitals and ballgames.
Sheryl passed away on January 8, 2017. She was preceded in death by her parents; husband Lee; siblings Thayne (Shirley) Henderson and Marilyn Mitchell; in-laws Beryl and Dorothy Hall, Bob and Betty Keenan, and Jean Wurster.
Those left to cherish her memory include her three daughters Lynn (Paul) Baker of Creston, IA, Cheri May of Waukee, IA, and LeAnn Keenan (Dave Storer) of Harlan, IA; three grandchildren Melissa Baker (Rocky Malloy) of Cedar Rapids, IA, Meredith (Don) Wulf of Jewell, IA, and Samantha Hornback of Waukee, IA; two great grandchildren Londyn Wulf and Hattie Wulf; in-laws Jim Mitchell of Des Moines, IA, Karl Wurster of Mount Ayr, IA, Marion (Donna) Keenan of Bolivar, MO, and Virginia (Fred) Siverly of Clearfield, IA; nieces, nephews, other relatives and friends.
Open viewing will be held at Armstrong Funeral Home in Mount Ayr on Thursday, January 12 from 12:00 to 8:00 p.m. with the family present 9:30 a.m. to 10:30 a.m. on Friday, January 13 at the Clearfield Christian Church in Clearfield, Iowa. Services will begin at 10:30 a.m. Friday with Sheldon Henderson officiating. Burial is in the Rose Hill Cemetery in Blockton, Iowa. Memorials are to Saint Malachy School in Creston and the Waukee Public Library. Online condolences maybe left at www.armstrongfh.com.