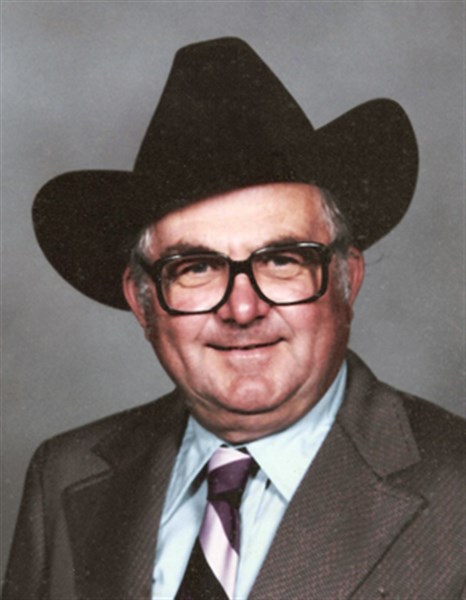 Al Clough, 85, of Ellston, Iowa, passed away on January 10, 2017 at Clearview Home in Mount Ayr, Iowa.
He was born on November 7, 1931, in a farmhouse near Tingley, Iowa to Fred and Dora (Hill) Clough. Al grew up on a farm and enjoyed raising livestock and showing sheep at the fair. He first attended junior college at Creston playing on the basketball team before graduating from Iowa State College receiving a Bachelor’s degree in Animal Husbandry. While there, he was a member of the Livestock Judging Team that won the American Royal Judging Contest in 1953. After graduation, he served two years in the U.S. Army and was stationed in Germany. Upon his return he worked for Iowa State Extension Service as a 4-H Youth Agent.
On August 6, 1960, Al married Dorothy Dukeshier at Grace Methodist Church in Des Moines, Iowa. They lived in Corning and Creston while he worked for Doughboy Feeds before moving to the farm near Lamoni, Iowa. In addition to farming he enjoyed auctioning, judging livestock at regional fairs, and working the ring at cattle sales throughout the Midwest. In the early 1970s he began breeding and raising Registered Charolais Cattle. He liquidated his heard in 1993, and began raising Thoroughbred Horses which raced at Prairie Meadows and other tracks around the country. He is known to many for the stories he told in his memoir, The Old Man on the Deck.
Al was preceded in death by his parents; his wife; 7 year old daughter, Carla; and sisters Aleeta, Althea, and Gean.
Graveside services were held at 11:30 a.m. on January 14, 2017 at Rose Hill Cemetery in Lamoni, Iowa with Rev. Steve McElroy officiating.
Casketbearers were Brett Parkhurst, Kathryn Parkhurst, Matthew Clough, Hannah Clough, John Thompson and John Overholtzer. A memorial fund has been established to go to the Tingley meal site.