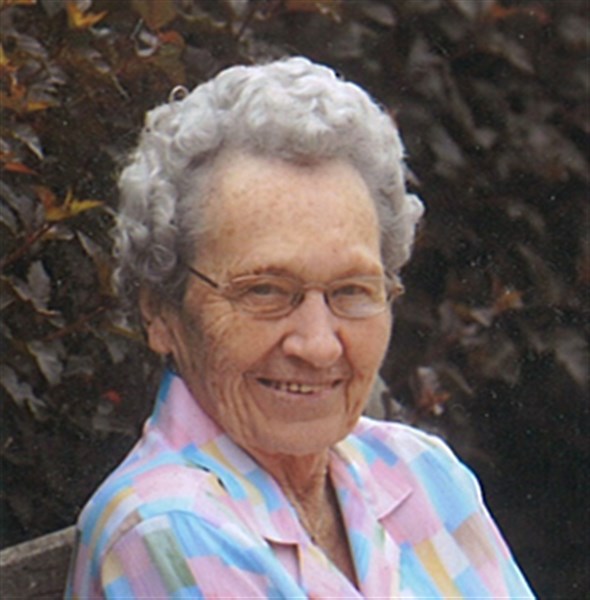 Elladeen Ruth McGahuey, daughter of Russell and Winnie (Emig) Laird, was born November 25, 1925 near Kellerton, Iowa.
The family moved to a farm south of Mount Ayr where Elladeen attended and graduated eighth grade from Lonesome Hollow country school. Elladeen went to Mount Ayr High School and not only did she graduate with the class of 1943; she also met her future husband, Karl McGahuey. She worked at the school as a secretary to the principal until 1944, waiting for Karl to graduate.
Elladeen and Karl were united in marriage on May 26, 1944 with Vernon McGahuey and Louise Baker, standing up with them. They lived south of Mount Ayr where Karl farmed and Elladeen worked beside him. They would also live outside of Lamoni where Cheryl Elaine was born on August 1, 1950. Roger Alan would be born on July 28, 1954. In 1962, the family moved to their present farm house on Hwy 2, east of Mount Ayr.
Elladeen was a hard worker and did many things on the farm and for her family: she milked cows, drove the tractor, put up hay, and then fixed all of their meals. Elladeen may have driven all the tractors but she never drove the corn planter or the combine! Elladeen had a strawberry patch, ducks and kittens. She loved to go mushroom hunting, ride the four wheeler and check cows. In her spare time, she did embroidery. Elladeen and Karl enjoyed dancing, playing cards with friends, and in later years, spending time in south Texas with their camper. They took trips to Canada, California, Arizona, and Colorado.
Elladeen and Karl were married 58 years when Karl passed away in December 2000. Elladeen moved into Mount Ayr in 2001 and eventually became a resident of the Mount Ayr Health Care Center in 2015. She passed away in the Care Center on January 21, 2017.
Survivors include her children Roger (Cathy) McGahuey of Mount Ayr, IA and Cheryl (Ron) Alexander of Indianola, IA; four grandchildren and their families Jessica Frost, Landry McGahuey, Tim Hunt, and Stacie Reha; one sister Kathie (Ted) Kniskern of Bryan, TX; three sisters-in-law Helen McGahuey of Mount Ayr, Lorrena Malin of Pella, IA, and Merna Laird of Spencer, IA; other relatives and friends.
Elladeen was preceded in death by her parents; husband; and three siblings Ganita Laird (Bill) Ewart, Duane Laird, and Larry Laird.
A memorial fund will be established in her name to the Mount Ayr Community High School for a scholarship fund in her name. Visitation was Monday, January 23, 2017 from 5:00 p.m. to 7:00 p.m. at Roger and Cathy McGahuey’s home. Burial will be at the Rose Hill Cemetery in Mount Ayr, Iowa.
Armstrong Funeral Home in Mount Ayr is in charge of the arrangements.