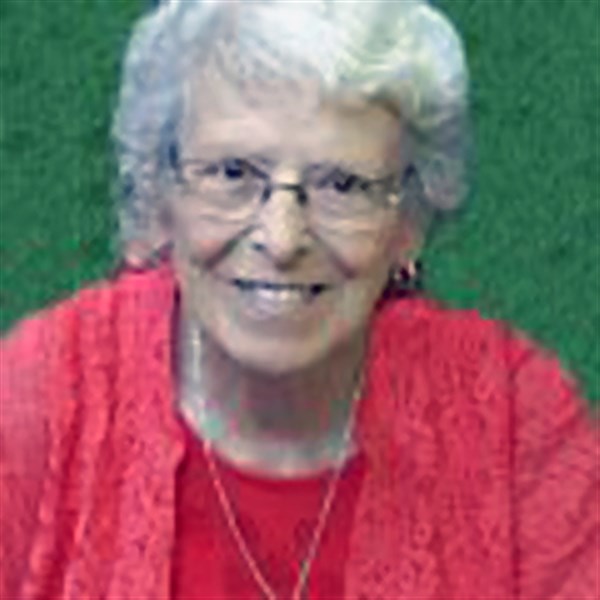 Frances Anne (Fran) Moffitt, daughter of Hulbert Ray and Frances Allen (May) Kleckner, was born September 2, 1929 at Clearfield, Iowa and went home to be with the Lord on January 21, 2017 at Laconia Center Genesis Eldercare Net in Laconia, New Hampshire. Fran was a devout Christian and very active in Bethel Baptist Church, Galesburg, Illinois and Crest Baptist Church, Creston, Iowa.
Fran grew up at Clearfield and graduated from Clearfield High School in 1947. She furthered her education by going to Business College in Omaha, Nebraska in 1948. While working for a doctor, she went to Creighton University to study as an x-ray technician. She later studied insurance at the University of Iowa.
In 1950, Fran married Robert G. Reid and they were married for 16 years. To this marriage two daughters were born: Mary Frances and Robin Raye. In November of 1967, she married Marvin Joe Moffitt. Both preceded her in death.
Fran and Joe lived in Orion, Illinois where, in addition to raising Mary and Robin, they were active in raising and training of German Shorthair Pointer dogs. They were proud of the 1972 AKC Field Champion Moesgaards Ace.
Fran worked at Deere and Company from 1968 until retiring as secretary to Vice-President and General Counsel in 1987. After retiring from Deere and Company, Fran and Joe moved to rural Galesburg, Illinois where they raised and trained Tennessee Walking horses. Fran loved and cared for her many pets over the years including Baby, Ragsy, Ginger, and Buddy. She enjoyed going to field trials with their German Shorthair dogs and showing the Tennessee Walking horses.
After Joe passed away on January 30, 2007, she moved into Galesburg and on December 30, 2012, she moved to Creston, Iowa.
Fran was preceded in death by her parents; husband; siblings Flossie, Marion, Orville, Donna, Genevra, Gayle, Franklin, Dora Lee, Belva, Lowanna, and Bill.
Survivors include daughter Mary (Jerry) Baker of Clearfield, Iowa; grandsons Caleb Baker and Ethan (Amelia) Baker and great grandchild Abigail; daughter Robin (David) Allar of New Hampshire; granddaughter Heather (Chuck) Ford and great grandchildren Kalyse and Riley; grandson Nicholas (Heather) Allar and great grandchild Paige; sister-in-law Lila Kleckner of Creston, Iowa; nieces, nephews, other relatives and friends.
Mrs. Moffitt has been cremated and a graveside service will be held at a later date when all of the family is able to get back, at the Bethel Cemetery, southwest of Diagonal, Iowa. In lieu of flowers, memorials may be made to the American Cancer Society, Crest Baptist Church in Creston, Iowa, or a donor of your choice.
Armstrong Funeral Home in Mount Ayr is in charge of the arrangements. Online condolences may be left at www.armstrongfh.com