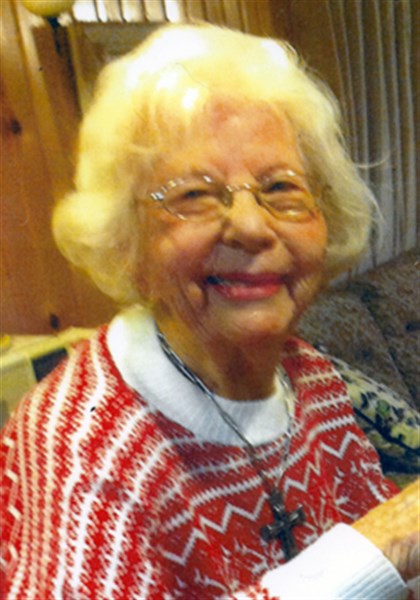 Donna Mae Olney Heyer, 102, of Berrien Springs, Michigan, formerly of Tingley, died Wednesday, January 4, 2017 at Pine Ridge Rehabilitation and Nursing Center in Stevensville, Michigan.
Funeral services were held on Tuesday, January 10 at Berrien Springs United Methodist Church.
Donna was born March 29, 1914 in Three Oaks, Michigan, the daughter of Jesse and Mae Frances Richardson. After several moves, the family settled in Berrien Springs in 1924. Donna graduated as salutatorian of Berrien Springs High School Class of 1931. She worked her way through college to become an elementary school teacher, graduating from Eastern Michigan University with a B.A. in 1945 and earning her Master’s degree from Western Michigan University in 1957.
She quietly eloped with Rolland Olney and accompanied him in his travels for work to Massachusetts, Florida, Indiana and eventually Arizona, where they moved for Rolland’s health. Donna taught school in Arizona for 22 years. After retirement in 1979, the couple continued to commute between Arizona and Berrien Springs until 1981 when Rolland died.
In 1989 Donna moved to Tingley, Iowa and married Clair Heyer, of Tingley. He preceded her in death in 2007. She was a member of the Tingley Christian Church and taught Sunday School for many years. Donna was a mother at heart. She loved all the children in the community and did her best to make sure they knew Jesus. She always made sure that the children had all that they needed. She was a blessing to all who knew her, young and old alike.
In 2008 she injured her back while visiting Berrien Springs, making it impossible for her to return to Tingley. She later founded the Berrien Springs Art Gallery at the Central County Senior Center.
Donna loved the Lord and did her best to serve him. She was very active in church, community and civic activities, musical and poetry endeavors. She enjoyed gardening, travel, architectural styles, art galleries, and writing editors.
Survivors include a stepdaughter, Kristine (Russ) Browne, nieces and nephews, and many friends in Iowa, Arizona, and Michigan. She was preceded in death by a stepdaughter, Kathryn Crawford; brother Harold, and a sister Caroline.