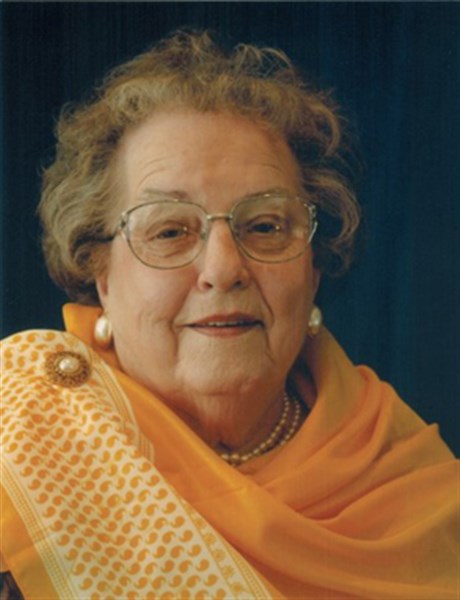 Nina Alice Miller Saltzman was born July l, 1927 at the home of her parents, James A. and Myrtle Rae (Morris) Miller, northeast of Redding, Iowa and passed away on January 31, 2017. She grew up with two older sisters, Margaret and Marjorie.
Nina attended school in Redding and graduated in 1944. There weren’t many in her class, but she liked to keep in touch with them and attended many class reunions.
Some of her fond memories growing up were slumber parties with her friend Pauline Comer (Henn), riding her pony Sparkle to Pauline’s and sometimes to town to pick up groceries. She had a bulldog named Fanny.
She met Robert Saltzman November 4, 1945, and they went to a show on their first date. They were married September 15, 1946, at the Mount Ayr Methodist Church with Richard and Frances Saltzman as attendants.
They lived on the Bert A. Saltzman farm south of Lesanville from their marriage until 1966, when they moved to a rented farm southeast of Tingley for one year and then moved northeast of Mount Ayr to a farm owned by Jessie Lesan. Robert and Nina purchased their farm northeast of Mount Ayr in 1973 and lived there until they moved to Mount Ayr in 1997. She lived in her own home until July, 2008, when she moved to Clearview Estates. She moved to Clearview Nursing Home in December, 2016. Her son Ronald Curtis was born June 23, 1948, and her daughter Barbara Jean was born November 4, 1950.
Nina worked at REA, Security State Bank, Ringgold County Extension Office, Ringgold County Farm Bureau, and Production Credit Association. She had a remarkable mind for names, dates, and numbers. She enjoyed genealogy and shared her information with other family members. At the assisted living she was proud of often winning trivia contests. Her mind was still sharp until a week or so before she died.
Nina was a talented seamstress and sewed clothes for herself, her children and grandchildren, and her daughter-in-law as well as making quilt tops. She was interested in crafts such as ceramics, embroidery, and paper cutting. She was a great cook who canned beef and made lots of good pies, including mincemeat, as well as other desserts. In the summer they enjoyed making ice cream and one week made nine gallons. She made fudge and divinity at Christmastime.
Nina had macular degeneration for many years and was declared legally blind in 1998, but she compensated and continued doing many things she loved as well as learned to use a computer.
Preceding Nina in death were her husband Robert Saltzman on December 1, 2000; her parents; Bob’s parents; sisters Margaret Hawk and Marjorie McDonald; brothers-in-law George B. Hawk and Ira (Mac) McDonald; niece JoAnn Hawk; and son-in-law Dan Foy.
Survivors include her children, Ron (Karen) of Corning, Iowa, and Barbara Foy of Urbandale, Iowa; grandchildren, Steven Saltzman of Ames, Amy Saltzman (Govind Persad) of Washington, DC, and Evan Foy of Urbandale; cousins, nieces, nephews, and many friends.
Services were held at 10:30 a.m. Saturday, February 4, 2017 at the United Methodist Church in Mount Ayr, Iowa with Rev. Skip Rushing and Rev. Tim Maxa officiating with Debbie Cannon and John Allen providing the music.
Burial is in the Rose Hill Cemetery at Mount Ayr, Iowa. Memorials are for a scholarship, in her memory, at Mount Ayr Community High School and the Iowa Commission for the Blind. Armstrong Funeral Home in Mount Ayr is in charge of the arrangements. Online condolences may be left at www.armstrongfh.com.