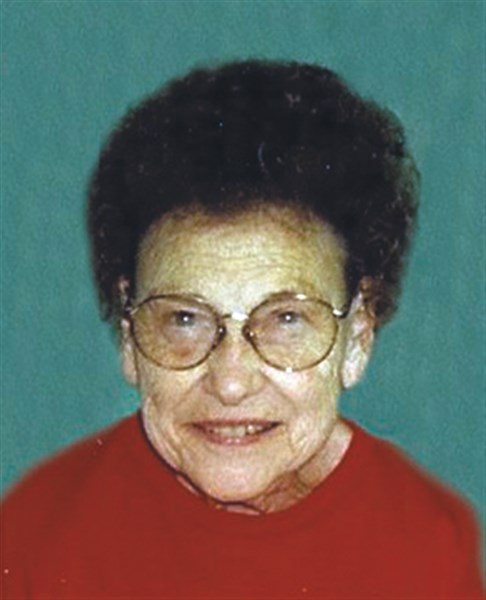 Barb Hoover was born on January 24, 1926 to Walt and Sadye (Law) Hoover of Ellston, Iowa.  She was born in the same rural farm house as Walt, on the original homestead of her ancestors.
Barb was the only child of Walt and Sadye and went to country school, then graduated from Tingley High School. She graduated from Drake University with a degree in music. During this time she had a part time job as a secretary for Motor Carriers.
Barb married John Kiburz on May 30, 1949 at the Little Brown Church in Nashua, Iowa. The couple then became school teachers in Arispe. Barb taught music, typing and shorthand. She started the first band at the Arispe school. Barb then became a full-time mom with the birth of their daughter Joy, followed by daughter Judy.
John and Barb became partners with Walt and Sadye Hoover in Hoover Angus Farm and later took over the family business. Barb witnessed during her lifetime how Hoover Angus grew from a small herd to one of international prominence, where semen from Hoover-bred bulls is used on four continents and numerous foreign countries.
Barb’s hobby was baking for the Iowa State Fair, where she competed for many decades. This was a family tradition started by Sadye Hoover. Barb’s primary entries in the State Fair were cookies.  She once claimed the prestigious “Cookie of the Fair” award and twice she claimed the Cookie Sweepstakes award for most blue ribbons received in the cookie division.
Barb passed away on March 1, 2017. She was preceded in death by her parents, Walt and Sadye Hoover.
She is survived by her husband of 67 years, John Kiburz; daughters Joy (David) McFarland and Judy Harrison (special friend Eric Fell); one granddaughter Landi (Andrew) Livingston; and one newborn great granddaughter, Gwen Livingston.
Services were held at 11 a.m. on Saturday, March 4, 2017 at the Armstrong Funeral Home in Mount Ayr, Iowa with Pastor Bill Armstrong officiating. Music was provided by Ginny Eighmy and Don Wilson with Landi Livingston giving the eulogy.
A private burial was in the Tingley Cemetery at Tingley, Iowa.  A memorial fund has been established in her name to be used at the Iowa State Fair.