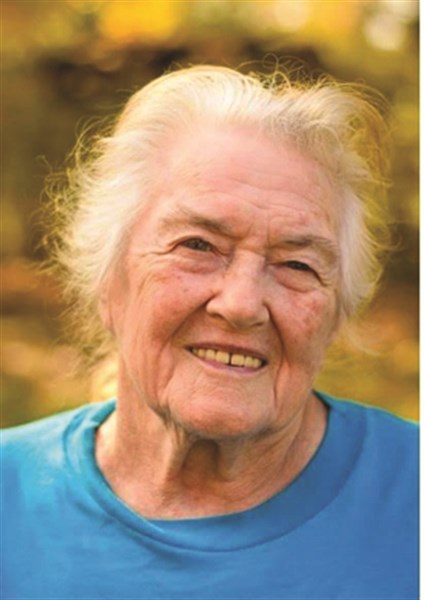 Martina Marie Stephens, daughter of Dwight F. and Mary B. (Brown) Stephens, was born in Benton Township, Ringgold County, Iowa, on September 15, 1932.
Martina married Rex Irvin Vest in Creston, Iowa. To this marriage, six children were born: Patricia, Peggy, Jane, Sherry, Shirley, and Judy. Rex was in the military and the family moved about every three years and lived in California, Montana, Illinois and Iowa. Martina was a stay at home mom and cared for her family. She made their clothes and covered them with love. Martina helped with Girl Scouts and other activities in their lives. She was a Sunday School teacher. She enjoyed gardening and caring for her flowers. Martina was a foster parent to Avis, who lived with the family.
In 1988, Martina moved to Martensdale, Iowa to care for her parents. Martina worked at The Plaza helping visitors with directions and information. She would become a caregiver for Tabitha Brandonberg. Martina will always be remembered as “Nonny” to her family. She was an inspiration to them and was instrumental in turning around the lives of family members who strayed from the right paths in life.
Martina passed away on March 6, 2017 at Iowa Methodist Unity Point Hospital in Des Moines, Iowa. She was preceded in death by her parents; and her two brothers John Everett and Charles.
Those left to cherish her memory include her daughters Patti Simmons, Peggy Langlitz, Jane Richmond, Sherry Bates, Shirley Combs, and Judy Newman; 16 grandchildren and 17 great grandchildren; her partner for over 20 years, Floyd “Butch” Maxon and his two daughters; nieces, nephews, cousins, and friends.
Services were held at 12 p.m. on Friday, March 10, 2017 at Armstrong Funeral Home in Mount Ayr, Iowa with Pastor Bill Armstrong officiating.
Casketbearers were Sara Bates, Rachael Simmons, Matt Langlitz, Robert Simmons, Ted Luebbert and C.J. Moellering. Honorary casketbearers will be Allen Murphy, Robert Combs, Kevin Newman and Amy Moellering.
Burial is in Rose Hill Cemetery at Mount Ayr, Iowa.
Memorials are to United Cerebral Palsy. Online condolences may be left at www.armstrongfh.com.