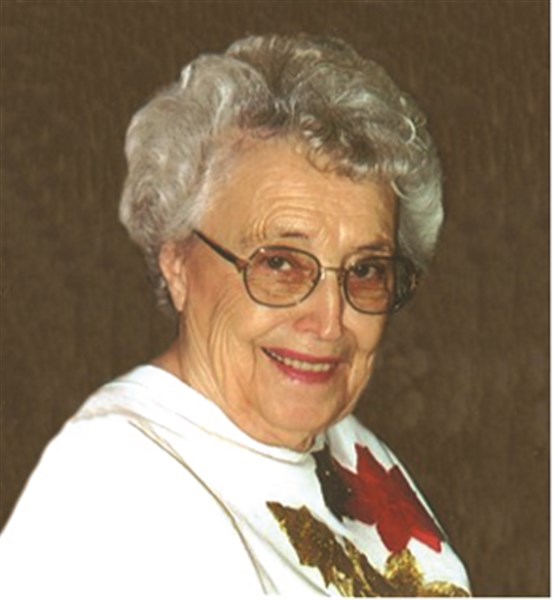 Lucile Buell Jackson, of Ellston, IA, daughter of Lynn and Elva Mathany Buell, was born November 5, 1918 at home on a farm in Liberty Township, Ringgold County, Iowa and passed away on February 13, 2017 at Clearview Home in Mount Ayr, Iowa after a short battle with pancreatic cancer.
After Lucile was born,the family moved to a farm near Beaconsfield where Lucile attended school until the middle of her junior year when her parents moved to Ellston, Iowa and began running Buell Service Station. Lucile graduated with the Ellston Class of 1936.
Lucile was united in marriage to Leland Walter Jackson on June 26, 1938 and they enjoyed almost 56 years of marriage before Lee’s death in May 1994. They eloped and were married in Collins, Iowa in a double wedding ceremony with Normand and Oletha Barbour Moon. In 1988, Lee and Lucile celebrated a double 50th wedding anniversary open house with the Moons. Two daughters were born to Lee and Lucile; Jeanine Kay Walters in 1941 and Sandra Lee Main in 1950.
After marriage Lee and Lucile lived in Mount Ayr, Beaconsfield and Des Moines until Lee was called to serve in the United States Army during WWII. During the time Lee served overseas, Lucile worked for the railroad at the Ellston Depot until it closed in December of 1945. Lee was injured while serving in the Philippines and there were indications that he might not walk again. In the fall of 1945, a representative from a locker plant in Des Moines came to the area looking for people to put in locker plants.  Lucile signed a contract to build the locker and then visited surrounding farmers to get them to sign contracts to rent a locker box for one year in order to fulfill part of the contract. That money was put in escrow until the locker was up and running. This was before rural electrical service so farmers did not have a way to store frozen products. Lucile’s dad, Lynn Buell, purchased the east half of the brick building where the Foxy Bobcat is now located and put the building in Lee and Lucile’s name.  Construction on the locker began in February 1946. The locker was built on the ground floor, leaving the upstairs apartment available for living space. Lee, having recovered, arrived home from the service in April 1946 and full operation of the locker began on November 6, 1946. Lucile and Lee continued in business for 32 years until their retirement in January 1978.
Lucile and Lee enjoyed square dancing, sometimes dancing three or four nights a week and after retirement traveled all over the Unites States to attend national square dance conventions. Together, they made many friends over the years and she cherished those friendships dearly. For several years, Lucile and Lee wintered in Alamo, TX with their square dancing friends.
With retirement, Lucile was able to pursue many hobbies that she didn’t have time for while running the locker plant. Some of her hobbies were sewing, plastic canvas needlework and, her favorites, working in her yard, raising flowers and feeding the birds. At the age of 98, she was still living in her own home and mowing her own yard. As getting around became more difficult, she would use her lawn mower for not only mowing and getting around the yard to take care of her flowers, but to get to the beauty shop to get her hair done and to go get her mail at the post office before it was delivered to her door.
Preceding her in death were her beloved husband, Lee; her parents, Lynn and Elva Buell; her brother, William Ernest Buell; sister-in-law, Faith Buell, and a special nephew who was like a son, Ronnie Long.
Those left to cherish her memory are her daughters: Jeanine Walters and husband Bernard of Chariton, IA and Sandy Main and husband Jack of Mount Ayr, IA; grandchildren, Denise Smith and husband Barry of Chariton, IA, Rick Walters of Chariton, IA, Chad Main and wife Jenny of Oskaloosa, IA and Nikki Binning and husband Jon of Warrensburg, MO; great-grandchildren, Cassedy Smith, Cody Smith, Riley Walters and Reed Walters, all of Chariton, IA, Megan and Sarah Binning of Warrensburg, MO and Ali, Maci and Kaylee Main of Oskaloosa, IA; and close nephews, Lloyd Buell and wife Becky of Jackson, TN and Larry Buell and wife Carmen of Urbandale, IA.
A Celebration of Life service will be held 10:30 a.m. Saturday, March 25, 2017 at the United Methodist Church in Ellston, Iowa. Rev Bruce Giese will officiate the services. Visitation will be 9:30 a.m. to 10:30 a.m. Saturday, March 25 at the church. Burial will follow in the Ellston Cemetery. Memorials are to the United Methodist Church and the American Legion Auxiliary, both in Ellston.
Armstrong Funeral Home in Mount Ayr is in charge of the arrangements and online condolences may be left at www.armstrongfh.com.