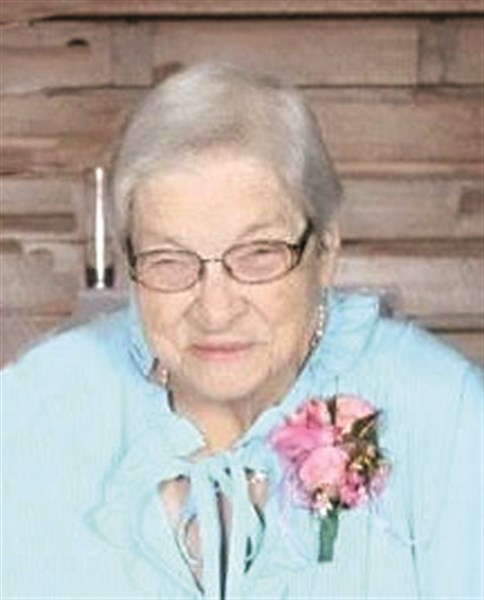 Ruth Evangeline Moreland, daughter of Ralph and Ruth (Snethen) Brenizer, was born southwest of Davis City, Iowa on March 6, 1930.
The family eventually moved to the Caledonia, Iowa area and Ruth lived around Mount Ayr most all her adult life.
Ruth married Selwyn Starkey in 1951. To this marriage was born two children Helen and Lavern. On November 1, 1974, Ruth married Wallace Moreland in Albany, MO.
Ruth was a housewife and mother and cared for her family. She was also in housekeeping and worked at the Ringgold County Hospital in dietary for 4 ½ years. Ruth had a strong faith and she was a member of the Free Methodist Church in Mount Ayr.
Ruth moved to Pella, Iowa and she became a resident of the Jefferson Place in Pella. She passed away there on March 15, 2017. She was preceded in death by her parents; her two husbands; and her two brothers Clyde and Lavern Brenizer.
Those left to cherish her memory include her children Helen (Doyle) Beede of Pewaukee, WI and Lavern (Bernice) Starkey of Pella, IA; seven grandchildren; seven great grandchildren with one on the way and one great great grandchild; other relatives and friends.
Services were held at 2 p.m. On Friday, March 17, 2017 at the Armstrong Funeral Home in Mount Ayr, Iowa with Rev. Charles Weiman officiating and Nancy Sackett and Debbie Larson providing the music.
Casket bearers were Monica Starkey, Derek Starkey, Terry Beede, Justin Hook, Logan Kelly and Dale Young. Burial is in the Rose Hill Cemetery at Mount Ayr, Iowa.
Memorials are to Jefferson Place in Pella, Iowa.