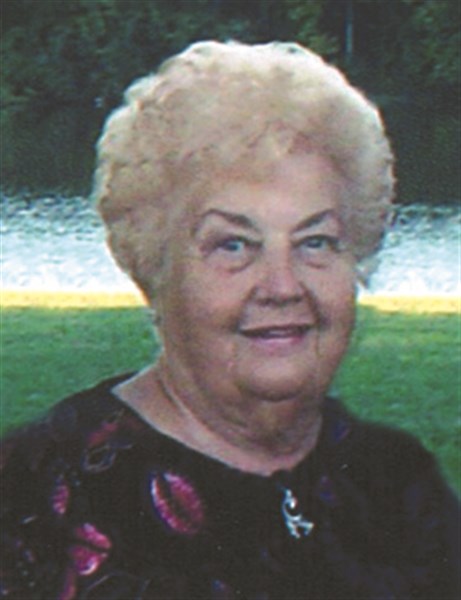 Rita Carolyn (Hewlett) Anderson was born November 6, 1938 in Grand River. She attended country school and graduated the valedictorian of Grand River High School. After graduation, she worked for an insurance company in Des Moines. While living in Des Moines she rode the bus down to Afton where Quentin would pick her up, or he would travel to Des Moines twice a week to see Rita.  Rita and Quentin Anderson were united in marriage on October 20, 1957. After their marriage, they called Ellston home.
Rita loved being on the farm gardening, raising flowers and made everything from home grown. Together they farmed, did some custom work, raised cattle, along with many other ventures. Soul mates, they did everything together and worked very hard their entire lives. Together they ran a grain elevator and had Massey Ferguson dealership until a tragic accident with Quentin’s dad, George. They left the area in 1959 and moved to Bethany, Missouri. There they built a bowling alley with a restaurant and a strip of rental spaces. Running a successful business, they were approached by many wanting to purchase the business. Rita was a complete farm girl and was ready to return home, so between 1961 and 1962 they made a move and began building a post office in Kellerton.
In 1963 through 1974 Quentin was sought out to run for State Representative and Senator. This was a busy time for Rita as she took care of things at home and attended the legislative women’s groups. On April 4, 1964 Quentin and Rita had a son Clinton Wade Anderson. During this time, they also were planning a huge project.
In 1969, together they worked to start the dream of building the land mark of Sun Valley Lake. Rita served as vice president of Sun Valley Lake and kept track of the paperwork, marketing and the continued process of building the lake community. The paperwork started in 1969. On March 23, 1970 daughter Cherri Lea Anderson-Vos was born. With the dam completed in 1972, it took 13 months for the lake to fill in 1973. This would be their life-long and fulfilling dream.
The lake was still on a steady progress with a marina, a large clubhouse where Rita would manage the restaurant. They continued building by adding a golf course and ice cream shop. The community continued to grow as they sold a portion of lake development in 1988. Together they continued to run the golf course and built a convenience store that Rita operated. Eventually they sold the golf course.
Quentin and Rita always kept busy building homes in Texas and Iowa. Rita always loved to garden, raise flowers, pick berries with her friends, plant fruit trees, baking and canning. Her grandkids were the joy of her life. Rita would always help her kids with their businesses and was always there to help with the grandchildren.
Rita passed away on March 23, 2017 in McAllen, Texas.
Rita was preceded in death by her parents Clifford and Doris Hewlett; parents-in-law George and Lena Anderson and brothers, Bernard Hewlett, Bob Hewlett. Left to cherish her memory are her husband, Quentin Anderson of Ellston; son Clinton (wife Paula) Anderson of Ellston; daughter Cherri (husband Jeff) Vos of Ellston; grandchildren; Quency Vos, Chania Vos and Grant Anderson, brother Don Hewlett; brother-in-law Carnie (Joyce) Anderson many nieces, nephews and friends.
Services were held at 10 a.m., on Wednesday, March 29, 2017 at the United Methodist Church in Ellston, Iowa with Rev. Bruce Giese officiating and Gene Bullock and Sharon Thalman providing the music.
Casket bearers were Corbe Anderson, Ryan Hewlett, Kevin Creveling, Marte Anderson, Scott Hewlett and Jeff England.
Honorary pallbearers were Quency Vos, Grant Anderson, Eddy Saylor, Chania Vos, Gary Kimes and Ronnie Shields.
Burial is in the Rose Hill Cemetery at Mount Ayr, Iowa. Memorials are designated to the United Methodist Church of Ellston and the America Legion Auxiliary of Ellston.