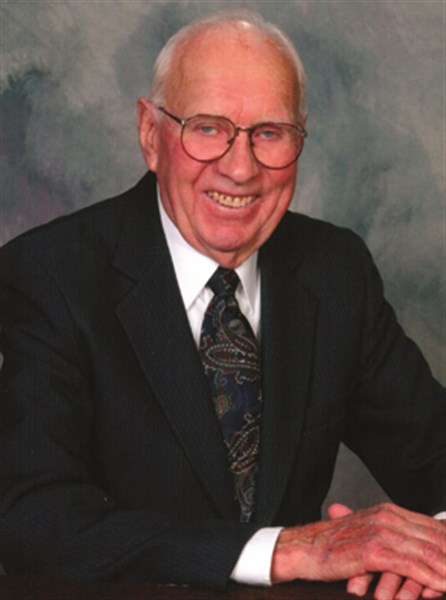 Charles Shelby Beauchamp, the oldest child of James and Myrtle Beauchamp, was born July 4, 1924, near Gentry, Missouri and went home to be with the Lord on March 28, 2017.
Shelby and Norma celebrated 65 years of marriage before his passing.
Surviving to cherish his memory are wife, Norma, daughters, Judy Erickson, Vickie Lawrence and husband, Keith, son Ronnie and his wife Kerri, four grandchildren, three great-grandchildren, sisters-in-law Beverly McCord and Yvonna Beauchamp, brother-in-law Norman Olney, and a host of extended family members and friends.
Shelby grew up in Gentry County, served two years in the Navy aboard the U.S.S. California and spent the majority of his life farming in Worth County.
Following his retirement from farming he worked for the City of Albany and ended his work career after 12 years at Walmart two months shy of his 89th birthday. He took pride in his work, doing all to the best of his ability.
Shelby accepted Jesus as his Lord and Savior at a young age and was currently a member of the First Baptist Church of Albany.
He was active in his community, serving on the school board, as organizer and president of the Worth County Water District, and as an officer of the American Legion.
Funeral Services were held at 10:00 a.m. Saturday, April 1 at the First Baptist Church in  Albany, MO.  Burial with Military Rites was in the Prairie Chapel Cemetery at Denver, MO.
Memorial Contributions:  Harrison County Hospice of Bethany, whose caring and capable staff made it possible for him to depart for heaven from his own home or to the First Baptist Church of Albany where he loved to worship his Lord and can be mailed to Roberson-Polley Chapel, 403 N. Hundley, Albany, MO  64402.  Online condolences:  www.robersonpolleychapel.com