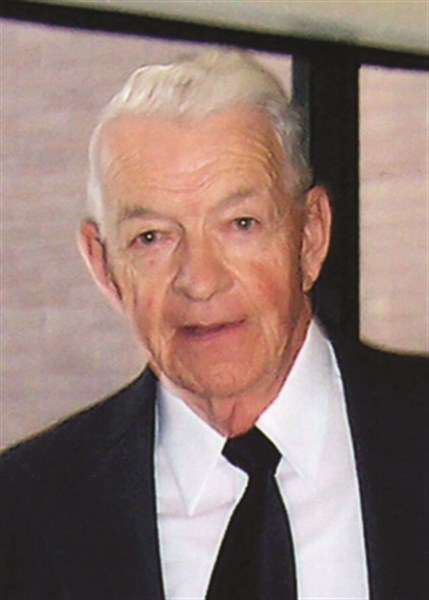 Bernard Andrew Sobotka passed away peacefully on May 26, 2017 at Otterbein Lebanon Senior Lifestyle Community. He was born on March 8, 1927 in Diagonal, Iowa to Andrew Joseph and Eva Marie (Driskell) Sobotka.
Bernard grew up in Diagonal and graduated from Diagonal High School in 1945. During high school he was an active athlete, playing basketball and baseball. He enlisted in the Army Air Corp and left for Ft. Leavenworth, Kansas the day after high school graduation, where he reported for induction. He served until the war ended, reaching the rank of sergeant. He then attended Iowa State University, where he met and married Marilyn (Lynn) Copeland before returning to the Diagonal community to farm and start a family. Bernard and Marilyn were married 68 years. In addition to farming, Bernard worked as Director of the Ringgold County office of the US Agriculture and Soil Conservation Service (ASCS) from 1961 through August of 1989. He always felt close to his coworkers in the ASCS office. Bernard and Marilyn moved from their farm east of Diagonal to Sun Valley Lake in 1986. In 2000 they moved to Creston, Iowa before settling in Lebanon, Ohio in 2010.
Bernard was a long-time member of the United Church of Diagonal, serving as board chairman for many years. He served on the Diagonal School Board, and was a member of the American Legion and Diagonal Lions Club. He enjoyed spending time with family and friends. Bernard particularly enjoyed meeting new friends at music jams in the area. Dancing was a favorite pastime. He also spent many hours walking for exercise and pleasure.
Bernard and Marilyn spent their retirement years traveling and visiting their grandchildren. Bernard was always ready to explore the farm, organize boat rides, turn a jump rope, or play ball with his grandchildren. He spent many hours watching their sporting events and performances. We all agree he was the BEST GRANDPA EVER!!
Bernard was preceded in death by his parents, Andrew and Eva, brother Elbert Lee and sister Maxine Myers, and brothers-in-law Carroll Strange, Darland McGinnis, and Bill Myers.
Bernard is survived by his spouse, Marilyn, who resides at Otterbein Lebanon Senior Lifestyle Community in Lebanon, Ohio; his five children: Kathy (Ron Beymer) of Cincinnati, Ohio; Dennis (Nancy) of Ogden, Utah; Kim of Phoenix, Arizona; Jodi (Jeff Nerad) of Cincinnati, Ohio; and Jon (Jenelle) of Cincinnati, Ohio; his brothers: Joe (Bernadine) of Diagonal, Iowa, Wallace (Patty) of Diagonal, and Chuck (Cawren) of Conrad; his sisters: Margaret McGinnis of Tabor, Iowa and Sheryl Strange of Virginia Beach, Virginia; his grandchildren (Kathy – Courtney (Jeff) Damon and Andee (John) Schneider; Kim -Megan (Adam) Page and Dylan (Arielle) Hendricks; Jon – Drew and Jamie; great-grandchildren: Jack Damon, Ellie and Sophie Schneider, Holden and Harrison Page; and his many nieces, nephews and other relatives.
A Celebration of Life service will be held at the United Church of Diagonal at 11:00 a.m. on Saturday, June 10. In lieu of flowers the family requests memorial donations be made to the United Church of Diagonal or the Diagonal American Legion.
Armstrong Funeral Home in Mount Ayr is in charge of the arrangements and online condolences may be left at www.armstrongfh.com.