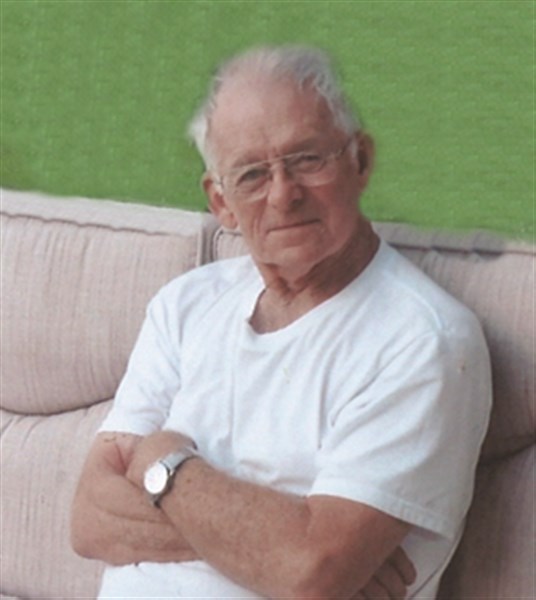 Jerry James “Jim” George was born in Union County, Iowa on October 26, 1939 to Arthur James and Geraldine (Strange) George.  His family lived in Parkville, Missouri and Illinois before moving back to Diagonal, Iowa area where he started kindergarten and graduated with his class of 1958.  During his high school years and one year of college, Jim worked for his Dad and ran a dozer.  Later buying the dozer when his Dad retired.
Jim married Willetta “Snookie” Vanderpluym on May 14th, 1959 and they moved to Peoria, Illinios where Jim worked and went to school at Caterpillar.  Not liking city living, they moved back home and started farming in March of 1960.
Jim and Snookie are the parents of three children.  RaNa Sue (Bob) Bailey, Patrick James George (Corina Boyer) and Shawn Ann (Marty) Cameron.  Jim and Snookie were lucky to have all three of their children and families living close, so they could spoil and watch their five grandchildren grow into adults.
His grandchildren are Ryan (Alle) Bailey, Chad Bailey and Becca, Levi Cameron and Shelby, Taylor (Bradley) Bentley, and Bailey (Dillon) Drake.  Jim has four special great-grandchildren, Alexa and Maverick Bailey, Quinn Bentley.  He also has one step-grandchild Sawyer Thomas and baby girl Cameron who will arrive in July 2017.
Jim had many jobs and hobbies in his lifetime.  Besides farming Jim worked for Leonard Sobotka operating a dozer, had a body shop and rebuilt cars.  When his son Pat was old enough to take on more farming, Jim went to work as a crop adjuster for Federal Crop with Jack Carson as his supervisor.  In 1983 he became an agent and sold crop insurance for private companies until he sold his agency to Vince Taylor.
Jim always enjoyed his music.  In the early go, Jim and Bill Livingston started playing guitars.  At one point in time, they were playing seven nights a week.  Through the years, Jim has played with different groups and made a lot of lasting friendships.  Jim enjoyed helping get the Chicken Inn at Creston going with Pat and Harvey Briles and later with Kevin and Debbie (Briles) Glick.
Jim passed away on May 17, 2017. He was preceded in death by his parents, Art and Jerry George; his parents-in-law, Paul and Mary (Canny) Vanderpluym.
Besides his wife, children, grandchildren, and great-grandchildren, he is survived by, sister-in-law, Susan Kinney; nephew, Colby (Tricia) Holmes; niece, Renante Kinney; three great-nephews, Russell Holmes, Soyer Wimer and Brekk Illg; three great-nieces, Katie Holmes, Addisyn Illg and Maryn Illg.
Services were held Saturday, May 20, 2017 at Armstrong Funeral Home in Mount Ayr with Pastor Bill Armstrong officiating.
Casket Bearers were Kevin Creveling, Bill Livingston, Jim McCalpin, Kevin Glick, Dick Stephens and Ron Dupay.
Jim was laid to rest at Diagonal Cemetery in Diagonal, Iowa.
Memorials for Jim are a scholarship for Diagonal School in Jim’s name.