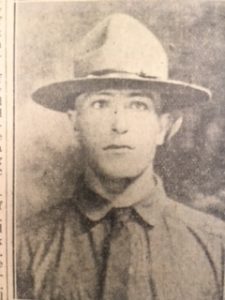 Lewis John Elick was born at Guernsey , Iowa, August 16, 1893, and died in France according to the offical report from the War Department October 7, 1918 aged 25 years, one month and twenty-one days. He grew to manhood at Guernsey and there obtained his education. He moved with his family to Ringgold County on March 1, 1915, and had resided there ever since. At an early age his father immigrated to America with his family from Bohemia and settled in Powsheik County. Here the family was raised and in the course of years the father of Private Elick by hard work, economy and industry acquired a clear title of more than a quarter section of land. Inspired by the need of more land and broader opportunities for his children the father purchased the Blackman farm of 400 acres in Rice Township in the fall of 1915 and moved here in the following spring. He at once entrusted to a large extent the care and supervision of the farm to his son Lewis. As is generally the case, the oldest son was the idol of the father’s heart, and his trust and confidence was worthily bestowed.

When the United States entered the war and numbers of the draft were announced, it was ascertained that Lewis J. Elick would sooner or later be called to the colors. “Louie” as he was affectionately called by his friends, was ready and eager to respond to his country’s call. He waived the usual agricultural exemptions, although his place on the farm could not be filled. The father was glad that his son was able to fight for the cause of freedom for both his native and adopted countries. When it was suggested to the father a year ago that it might be possible to secure a deferred classification for his son on account of corn husking, he replied: No. The boy wants to go, and I want him to go when his turn comes. We will get along here as best we can.”

You ask why the allies won the war? You have the answer in the unselfish patriotism of this son and these parents, which has been echoed in countless thousands of American homes.

How proud we all were of him the morning he left for war. He started from Mount Ayr on the morning train August 7, 1918, in company with Privates Leslie Thompson, William Leo Mullin, James L. Stephens, Floyd C. Jennings, Frank H. Bliss, Leonard M. Stanley, Clarence C. Goff and Arthur V. Comer. They went at once to Jefferson Barracks at St. Louis, MO., and later were sent for training to Camp McArthur at Waco, TX. After a few months of training his division was ordered overseas, and the train which conveyed his regiment to the Jersey seaport was in a wreck and several of his comrades were killed. The next word came six weeks ago that he landed safely “somewhere in France.” As days and weeks sped by his parents , brothers and sisters became uneasy and worried for fear that he might be sick. And after a vigil of six weeks fond hopes were crushed by the sad tidings from the war department.

The death of Lewis Elick is inexpressibly sad. He was a young man of clean and upright life with high ideals. He was wonderfully industrious and possessed unusual skill as a farmer and stock man. The chances were all in his favor of a safe return home with the rich and added experience of army life abroad–a liberal education in itself. As the trustee of his father’s estate he would have easily become one of the leading farmers and influential men of Ringgold County. The future held in store for him golden promises of earthly reward.

Then followed the peace armistice and with it the hope and joy that all of our boys in France would arrive safely home. But disease had already done its tragic work and the harvester of death had plucked one of our fairest flowers to be entwined by loving hands with the fluer de lis of bleeding France. Lewis J. Elick’s life and works are ended. He has not lived in vain. For such as he there is no death, for he will live forever in the memory of all who love justice and freedom. All honor to his glorious memory.

He leaves beside his father and mother one brother, Charles and four sisters, Mary, Helen, Kate and Julia.