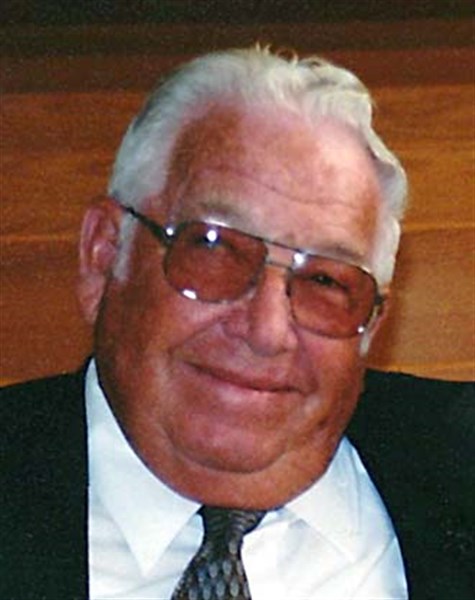 Allen Keith Elliott, the only child of Allen and Laura Parker Elliott, was born January 15, 1931 in rural Lamoni, Iowa and died August 19, 2013 in Des Moines, Iowa. Keith attended school at Togo, Evergreen, Happy Hollow and Black country schools until the ninth grade when he attended Lamoni high school, graduating in 1949. His dad would occasionally take him to country school on horseback, but when his dad left, Keith would leave school and walk back home sometimes beating his dad back to the farm.
When he was a youngster, he looked out the window of the house and just started crying inconsolably. His mom came to see what major catastrophe was unfolding and asked Keith what was wrong.  He pointed to the half moon replying, “Someone cut the moon in half.”
When growing up at home, Keith was active in 4-H and enjoyed showing shorthorn cattle at the local fairs and at the Iowa State Fair.
On May 29, 1949 Keith married Charlotte Kaestner. To this union four children were born,  Roger, Joyce, Marcia and Anita.  Keith and Charlotte were long-time members of church. They lived on the farm their whole married life until 1998, when they sold the home farm and moved to town. They kept two farms and the livestock, which they later sold to a grandson and a daughter.
Keith worked at the Farmers Coop, Lamoni high school and Lamoni Livestock. He was very active in 4-H, first as a member and then as a 4-H leader. He was on the 4-H council, coop lumber board and the Lamoni high school alumni committee.
Keith was so very proud of his work and accomplishments in the Big Creek Watershed in Ringgold and Decatur counties for over 40 years. He served as district commissioner and assistant commissioner in Ringgold county.
Keith was preceded in death by his parents; father and mother-in-law; two brothers-in-law, and three great-grandchildren.
Survivors include Charlotte, his wife of 64 years; children, Roger and wife Beth Elliott, Joyce and husband Cleo Shields, Marcia and husband Malcolm Ogier and Anita and husband Julian Toney, all of Lamoni, Iowa; 15 grandchildren; 30 great-grandchildren, and a host of other relatives and friends.
Funeral services were Friday, August 23, 2013, at Trinity Christian Church in Decatur county, Iowa with Rev. Terry Roberts officiating. Burial was at Rose Hill Cemetery in Lamoni, Iowa.
A memorial fund has been established by the family.