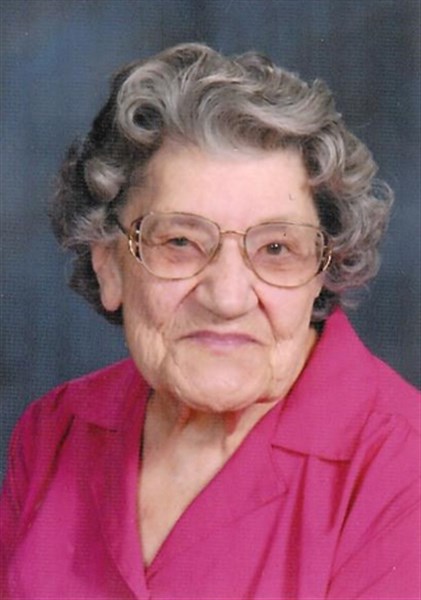 Bertha Anna Day was born to Anna and William Ricker on July 13, 1921 near Diagonal, Iowa in Ringgold county. She graduated from Mount Ayr high school at age 17, in 1939 and attended college in Maryville, Missouri where she received her teaching certificate. She taught primary-eighth school for five years at Fairview and Grant township.
She married Homer Day on July 15, 1944 and to this marriage a daughter was born, Dolores Day Fletcher, on April 2, 1946. Bertha worked on the family farm and took care of her daughter, especially after Dolores had whooping cough at the age of five and developed a lung disease because of this illness. In 1970 Bertha moved out to Colorado Springs with her husband, Homer, to be closer to their only child, Dolores, and two small grandsons and to be able to help out. She started working at the Union Printers Home in 1971 and worked there for 30 years. She was 80 years old when she retired.
She was baptized catholic and, after moving to Colorado Springs, joined Faith Presbyterian Church. She taught vacation Bible school, Sunday school and worked in the nursery for many years until her eyesight and body could no longer allow her to do so. Bertha loved kids and her grandchildren, great-grandchildren and great-great-grandchildren have been the enjoyment in her life.
She raised big gardens on the farm, canned and made jams and jellies. She always baked and in her later years would make favorite desserts for family members for their birthdays until she moved to assisted living in January 2012.  She loved to read and still read her large print Bible every day until she was unable to after a fall that broke her hip in February 2013. She liked to embroidery in her younger years and made several clothes and costumes for Dolores.
She was preceded in death by her father, William Ricker; mother, Anna Sobotka Ricker; sisters, Esther Ricker and Helen Todd; brother-in-law, James Todd; husband, Homer Day; father-in-law, DeWitt Day; mother-in-law, Orilla Day; previous son-in-law, David Fletcher; a great-great-granddaughter, Jennifer Washington, and many aunts, uncles and cousins.
Left to cherish her memory are her daughter, Dolores Day Fletcher; three grandchildren, Michael (Elizabeth) Fletcher, Charles Fletcher and Christina (Jason) Ochsie; eight great-grandchildren, Angela (LeRoy) Atkins, April Fletcher, Ashley Fletcher, Michael Fletcher, Alicia Fletcher, Diane “Kaye” (Tyler) Smalley, Kyle Ochsie and Kevin Ochsie; five great-great- grandchildren, Lachelle, Mason, Caiden, Kaylee and Kaiya; niece, Lynette Hudson; nephew, Robert Todd; great-niece, Sandy Hudson; great-great-nephew, Anthony, and close cousins.
Cousins Rosanne Crumley and Mary Stamper helped with all of their time and support.
Memorial contributions can be sent to Faith Presbyterian Church, 1529 North Circle Drive, Colorado Springs, CO 80909 or the American Lung Association in memoriam of Bertha Day.
Services will be conducted at Watson-Armstrong Funeral Home in Mount Ayr on Friday, October 4, 2013, with Pastor Ed Shields officiating. Organist is Judy Newton.
Casket bearers include Michael Ray Fletcher, Robert Todd, Edward “Jason” Ochsie, Kyle John Ochsie, Kevin John Ochsie and Michael David Fletcher.
Honorary pallbearers will be Charles Fletcher, Elizabeth Baker Fletcher, Christina Fletcher Ochsie, Lynette Hudson, Roy Lumbard, Phil Stamper, Angie Washington, April Fletcher, Ashley Fletcher, Kaye Smalley and Alicia Fletcher.
Burial will be in the Diagonal Cemetery in  Diagonal.